University: DATTCO threats were a ‘miscommunication’ 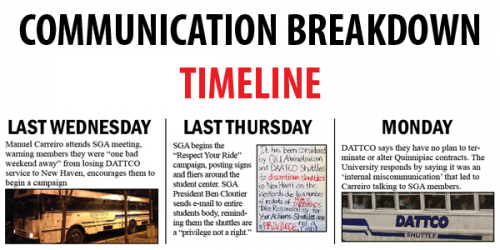 Citing an “internal miscommunication,” initial reports of DATTCO shuttle service threatening to sever ties with Quinnipiac because of students receiving numerous citations in New Haven are false, according to Vice President of Public Affairs Lynn Bushnell.

Last week, Vice President and Dean of Students Manuel Carreiro spoke during an SGA meeting, saying that Quinnipiac was “one bad weekend away” from losing New Haven shuttle privileges. According to DATTCO Chief Operations Officer Cliff Gibson, this couldn’t be further from the truth.

“Our contract with Quinnipiac is fully intact and stands very well,” Gibson said. “I’ve talked to several of our contacts, we have never stated we are canceling service of any kind.”

As a result of Carreiro’s encouragement during the meeting, SGA members started a campaign titled “Respect Your Ride.” Last Thursday, students hung posters and fliers around the Carl Hansen Student Center and Café Q. Also, SGA President Ben Cloutier sent out a university-wide email on behalf of SGA reminding students that the shuttles are “a privilege and not a right.”

During the meeting, Carreiro said that 38 Quinnipiac students have been issued citations over public urination. According to New Haven Police Department spokesman David Hartman, that number is incorrect. 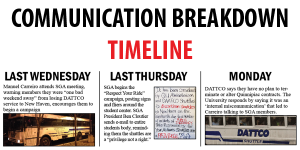 “The number of students since Sept. 16 that have been cited is over 100, and between 80 to 90 is from Quinnipiac,” Hartman said.

Hartman also said that the NHPD has made multiple attempts to contact Quinnipiac to inform students and said their requests were denied every time.

“We have had little luck with Quinnipiac to talk to students and student groups,” Hartman said.

When asked why the requests had been denied, Bushnell said, “the university is willing to do whatever it can to make sure this type of inappropriate behavior is discontinued immediately. We don’t want a small minority of students ruining this valuable service for the rest of the student body.”

Said Hartman: “Southern Connecticut State University has invited us on campus for years now to talk to students, and we haven’t had that relationship with Quinnipiac, and that’s a shame.”

“Behave, and you’re all right. However, we will not tolerate this seemingly minor behavior,” Hartman said.