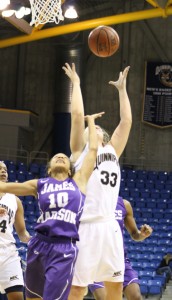 A comeback attempt from the Quinnipiac women’s basketball team in Friday’s season-opener fell just short as visiting James Madison escaped with an 81-73 victory.JMU led by 22 points over half-way through the second half but let the Bobcats come all the way back, cutting the score by one.  The Bobcats put together stretches of great play but in the in end, the inconsistencies proved to be too much to overcome.Quinnipiac head coach Tricia Fabbri was pleased with many things the Bobcats accomplished but will look for her team to be more consistent throughout the game.

“That’s going to be our goal moving forward after tonight,” Fabbri said.  “Going to get those 40 good minutes of the game, and then I think we are going to become a really really dominant team.”

A layup from JMU’s point guard Tarik Hislop put the Dukes up 67-50 with 6:37 left in the second half.

At this point, Quinnipiac redshirt junior Felicia Barron came alive and jump started the Bobcats previously stagnant offense.  Barron converted a layup and was able to draw the foul.  She missed the free throw but picked the rebounder’s pocket and finished with another layup.

Barron also knocked down a pair of free throws less than a minute later off of a diving steal from freshman Gillian Abshire.

“When I got into the game I just thought: play hard, as hard as you can to get this lead back,” Barron said.

The stellar play from Barron rubbed off, breathing air back into the lungs of the seemingly defeated Bobcats.  Fabbri also upped the ante, instituting a full-court pressure defense that flustered the Dukes, causing a turnover on five straight possessions.

“When you’re playing from behind, you can be as loose as you want,” Fabbri said.

Down 67-60, coming out of a JMU timeout, the Bobcats had the crowd on its feet and the Dukes on their heels.

A pair of threes from Quinnipiac freshman Jasmine Martin capped off a 16-0 Bobcat run and cut the JMU lead to one with 3:43 remaining.

This would be as close as the Bobcats would come.  The Dukes answered the Quinnipiac run, putting together a 10-0 run of their own, extending their lead to 77-66 with just 38 seconds left.

The game was a sloppy affair, as the teams combined for a total of 44 turnovers.  Quinnipiac starting point guard Gillian Abshire committed seven turnovers in her first collegiate game but was also an integral part of the Bobcats comeback bid.

“We’re going to go through some growing pains with a freshman point guard,” Fabbri said.  “She [Gillian Abshire] is 30 days in or 31 days in and really did a fantastic job.”

Quinnipiac and JMU went neck and neck in the first half, trading points in the paint.  The Bobcats looked to control the paint from the start, pounding the ball into the post on offense.  Sophomore forward Camryn Warner paved the way for the Bobcats with nine first-half points.

“Our whole system is set up to get it [the ball] into the post,” Warner said.

Warner used crafty footwork down low, unleashing an arsenal of post moves to create open looks and get to the charity stripe. In the process, she tallied her first career double-double, finishing the contest with 12 points and 11 rebounds.

“Cammy Warner was fantastic for us tonight,” Fabbri said.  “She anchored us on the inside with the shuffling in of our other post players.”

At the intermission Quinnipiac trailed JMU 36-28.  Fabbri tried to stress the magnitude of the game and the level of play that they were up against and hanging with.

“Do you understand who you have in the gym right now?” Fabbri said she asked the players at halftime.  “An NCAA tournament team.  For the last couple of years they have been a top 50 program.  We have them, let’s go out and get them.”

The message didn’t seem to get through until late in the second half as Quinnipiac came out flat after halftime.  Poor shooting plagued the Bobcats early on and they finished the game shooting 33.3 percent from the field.  Prior to the frantic comeback, Quinnipiac was shooting a mere 25.9 percent.

Freshman Jasmine Martin made major contributions for the Bobcats in her first career collegiate game.  Martin was instrumental in the Bobcats comeback, pouring in 20 points.  Of those 20 points, 17 came in the second half.

The Bobcats return to the hardwood at Holy Cross on Wednesday, Nov. 16.