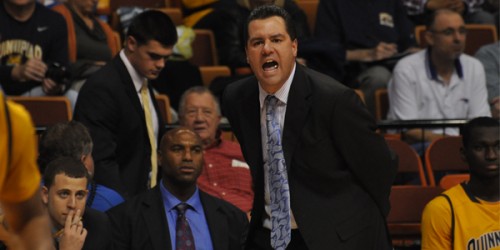 Despite erasing a 15-point deficit late in the second half, the Quinnipiac Bobcats opened their season with a 72-60 loss to the Fairfield Stags Friday night in the Connecticut 6 Classic at the Mohegan Sun Arena. Playing without last season’s leading-scorer James Johnson and injured guard Garvey Young, the Bobcats were led by sophomore Ike Azotam’s 17-point, 10 rebound performance.

“I wish we had one more playmaker, shotmaker with the ball right now, in particular tonight without James Johnson,” Moore said.

Quinnipiac (0-1) staged a comeback midway through the second half, as a forceful effort by Azotam in the paint contributed to Quinnipiac’s game-leading 43 rebounds, alongside an 18-4 run. After a Dave Johnson follow-up lay-in and two free throws by freshman Zaid Hearst, the Bobcats knotted the score at 57.

Even with the charge by Quinnipiac, the Stags did not falter, displaying poise and presence in the final five minutes of the game. Fairfield’s Derek Needham’s contested 3-point jumper from the wing established a 65-58 lead with just under three to play, and Fairfield never looked back. Needham’s dagger was the 10th 3 of the night for the Stags, and provided enough momentum for the team to hold Quinnipiac to just three points for the rest of the game following the tie.

“Fairfield is such a good offensive team, and they’re defensive numbers aren’t quite going to show it,” said Moore. “And we’re just quite not at our standard yet.”

The Stags jumped off to an early lead, as senior Rakim Sanders penetrated the Bobcats man-to-man defensive effort quickly with five points in the first eight minutes. Fairfield (1-0) would eventually extend its lead to 15 just six minutes later, after senior Ryan Orlander knocked down a triplet of big shots, two of which were uncontested to make it 48-33 with 16:14 to go in the second half. The 7-foot Orlander would finish the evening with 12 points and five rebounds.

Moore’s Bobcats struggled in the first half, turning over the ball nine times over the first 20 minutes. Freshman Ousmane Drame accumulated three fouls during that period, as the Bobcats over the limit with nine fouls. Fairfield, however, also was in the bonus, and Quinnipiac would settle for 5-10 from the free throw line in the first half. Nonetheless, the Bobcats trailed 38-29 at the break.

Come the second half, the Stags continued to pour on points from beyond the arc on the young Quinnipiac squad, who played seven freshmen during the contest. The Bobcats were overwhelmed by an aggressive shooting attack from the Stags, who shot 55 percent from the field during the final half. Fairfield’s shooting display propelled them to what appeared to be a comfortable 52-39 lead with 13 minutes remaining in the half.

Quinnipiac shot 40 percent from the field on the evening, a showing that Moore made clear was somewhat expected.

“Offense doesn’t come easy for us right now, but that one’s on me,” Moore said.
Even with the victory, the Stags were challenged by Quinnipiac’s sturdy play inside and determination.

“Unfortunately we faced a very good team tonight, and we were certainly on the ropes,” first-year Fairfield coach Sydney Johnson said. “We’re thankful for a win, but we certainly have things we need to work and improve on.”

Azotam also found difficulties stepping into his role as a veteran presence on an inexperienced squad.

“I’m not really in a leadership role yet, I’m learning some qualities. It was tough in the first half to get everyone going, giving them constructive criticism in a good way,” he said.

James Johnson will return to action Tuesday, as the Bobcats take on Yale at home at 7 p.m.