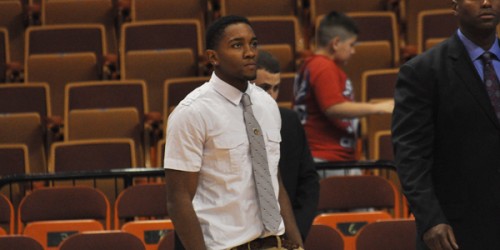 Quinnipiac men’s basketball head coach Tom Moore will suspend senior guard James Johnson for the team’s season opener against Fairfield Friday at 5:30 p.m. at Mohegan Sun, while sophomore forward Ike Azotam will be active, according to a statement released from the Quinnipiac University Department of Athletics and Recreation.

“Quinnipiac Men’s basketball student-athlete James Johnson will serve a one-game suspension for disciplinary reasons when Quinnipiac competes against Fairfield on Nov. 11, 2011, as determined by Men’s Basketball Head Coach Tom Moore. No further suspensions are anticipated at this time,” the statement read.

Johnson and Azotam were charged with third-degree assault and second-degree breach of peace stemming from an on-campus incident Sept. 18. According to a police report, the two players struck students who were trying to break up a fight.

Moore suspended them from the team once he heard of the incident but reinstated them after the university sanctioned the pair Oct. 6.

They pleaded not guilty to their charges at their arraignment Sept. 26. Their pre-trial hearing was postponed to Nov. 16 (one day after the team’s home opener against Yale) after defense attorney Thomas Lynch requested a supplemental Hamden Police report.

In addition to the absence of Johnson, Moore said that junior guard Garvey Young will miss at least the team’s first two games due to a shoulder injury he sustained in practice earlier in the preseason.

Without Johnson and Young, it is likely that Moore will have a freshman in the starting lineup. Nate Gause and Zaid Hearst are two candidates to start. Junior guard Dave Johnson is projected to be in the lineup after playing all 32 games last season.

With Azotam in the lineup, the Bobcats can start him alongside Jamee Jackson in the frontcourt. Sophomore Austin Alecxih, who missed last year after transferring from UNC-Asheville, can start, while sophomore Alex Jackson, who transferred from a junior college, can play.

James Johnson, 21, who was selected to the preseason All-Northeast Conference first team, was the team’s leading scorer last season, as he averaged 16.1 points per game, which ranked fifth in the NEC. He has also started all 96 games the Bobcats have played since his freshman year, a program record for consecutive games played.

Azotam, 20, was second on the team in rebounding last season to Justin Rutty, the NEC’s all-time leading rebounder. Azotam averaged 5.1 points and 5.4 rebounds in 31 games played.