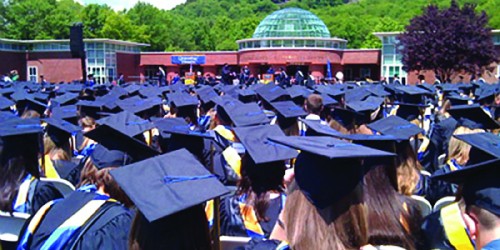 The class of 2012 will be separated at the commencement ceremony in May, according to updated information released from Karla Natale, director of special events at Quinnipiac.

Commencement is traditionally held on the Quad with the entire graduating class. This is the first year a split ceremony has been planned.

“With the number of people coming to the event and overall just the scheme of the event, it wouldn’t be possible for us to do one commencement on the Quad,” said Dan Scott, SGA senior vice president.

Senior Shannon Fitzmaurice said she wishes everyone could graduate in one ceremony.

“I was at the graduation last year and it wasn’t unbearable at all,” Fitzmaurice said. “Also, I have been to other graduations that are twice the size of Quinnipiac and the graduation wasn’t split. We started QU together, we should leave it together.”

Likewise, senior Ladonis Gaillard said she thinks the entire class should be together.

On the other hand, senior Anissa Holness said she likes that the ceremonies are split.

“Most of my close friends are communication majors anyway, so I would rather be in a ceremony with people I actually know and care about instead of waiting around for a bunch of people I don’t know,” she said.

Ruben Rodriguez, a senior accounting major, also said he does not mind the split ceremonies.

“While graduation is important, I don’t really care if I miss out on someone’s name being called to get their diploma. Senior week will be a good time to spend some of my last days with my friends here,” he said.

Scott and Natale said they are looking at potential commencement speakers now.

“It’s really hard to find somebody that will stay for two ceremonies,” Natale said. “We don’t want to run into the issue where we have two speakers, and one maybe turns out to be really great and one not so great. We are examining the whole commencement speaker process right now.”

There is the possibility of having two independent speakers at the separate ceremonies that best fit the schools graduating together, according to Scott.

Faculty members and more student speakers are also being considered. President John Lahey will speak at both commencements, Natale and Scott confirmed.

Both ceremonies will commence on the Quad with open seating for guests. Tickets are not required.

In the event of severe weather conditions, commencement will occur at TD Bank Sports Center with ceremonies still split. Students will receive four tickets for guests, which must be presented at the door. For the first time, students will be able to reserve tickets online once they are made available, Natale said.

“By making the move to two ceremonies, the University is able to address many ongoing issues such as the length of the ceremony and the comfort of the graduates and their families,” Bushnell said in the announcement.

She added in the statement that a single ceremony was no longer possible, which was estimated to last four hours.

Lenny Neslin contributed to the reporting in this story.