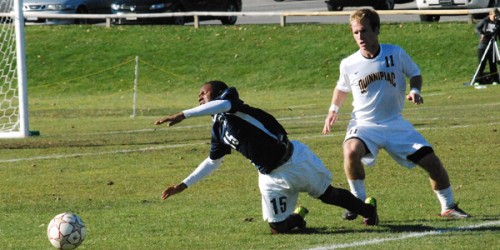 Another season gone by and another turbulent year for the Quinnipiac University’s men soccer team.

The Bobcats had hopes of an Northeast Conference playoff berth with a talented squad, but the Bobcats lost three out of their last four, including a 2-1 game to the St. Francis (N.Y.) Terriers at Quinnipiac Soccer Field Sunday on Senior Day.

Quinnipiac head coach Eric Da Costa believes the up and down season can be attributed to inexperience.

“I think at the end of the day when bring 14 players into a program there’s only 23 on our roster, there is going to be a significant amount of time spent on development and there is a major learning curve there,” Da Costa said.

On senior day, Quinnipiac honored captain Durval Pereira, William Cavallo, Rothbart and Brett Uttley for their contributions and accomplishments to the program over their last four years.

“I’ll miss this group of kids and the time that we shared,” Rothbart said. “We had a large graduating class last year and coach had to do a lot of recruiting. He brought in a lot of players and they definitely can learn something from us. Our class went to the playoffs, went to a championship and I think we have a mentality and a type of style that they could definitely benefit. Now, they know that is what this program is about and they can take it from there.”

The Bobcats played this year with 11 freshmen and their road struggles continued, as they went 1-7 away from home.

“They have plenty of skill,” Rothbart said. “If they just come together as a team and play as one unit and play within themselves, there is no stopping them.”

Da Costa said he realizes that the inexperience led to some of the tough losses but some of the freshmen should improve over time.

“We can take away from this year how a lot of freshmen have logged a significant amount of time,” Da Costa said. “We are searching for some leadership now that the seniors are gone and now that D.J. has moved on. We need someone to step up and assume that role as the leader.”

St. Francis controlled the tempo throughout the first 10 minutes of the match as the Terriers offense kept pushing the ball and created quality scoring opportunities. This led to the Terriers first goal just eight minutes into the first half. St. Francis’ Maabdi received the ball near midfield and dribbled down the left side where a 2-on-2 situation was developing. Maabdi stopped on a dime, made a move to his right, just inside the box and blasted a low line drive into the back left corner of the net under the outstretched arm of Bobcats goaltender Borja Angoitia.

The Terriers aggressive offense paid off again this time in the 51st minute of play. A corner kick resulted in Maabdi’s header being deflected by heavy scrum of Bobcat defenders in the box. The Bobcats defenders were battling for the loose ball but the bouncing ball fell free to John Johansson, who fed a pass to Ytterbom. With the heavy congestion of players fighting for the ball in front of the net, Angoitia could not see Ytterbom or the ball in front of the scrum. Ytterbom knocked the free ball into the net for a 2-0 lead.

The Bobcats would not go down without a fight, however, as von der Heide scored his second goal of the season after being substituted into the game in the last 18 minutes. Weloy Aarseth sprinted towards the middle of the box before rifling a pass to von der Heide in the box. von der Heide turned and fired a shot past Terriers diving junior goalkeeper Tyler Clarhaut.

Angoitia and junior Josh Lavallee who came in as a reserve in the 72nd minute, combined to make seven saves in net for the Bobcats, while Clarhaut turned away seven shots for the Terriers.

The Bobcats had seven one-goal losses this year, but Da Costa is optimistic for next season, as the team will return a majority of its roster.

“We are excited about the future, but we have a lot of work to do,” Da Costa said.