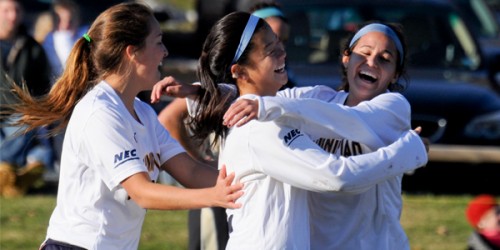 In a game full of cheers and tears, the Quinnipiac Bobcats defeated the Bryant Bulldogs, 2-0, on Senior Day Friday afternoon at Quinnipiac Soccer Field. The Bobcats (5-10-1, 4-6 Northeast Conference) end their season with their first victory since defeating Monmouth on Oct. 21.

Quinnipiac was led by an aggressive offensive attack, putting up 14 shots over the course of the contest. At the 40-minute mark, junior Chacha Naito scored her first goal of the season as she sent a lob-shot over Bulldogs goalkeeper Kelsi Jacob.

Forty-one seconds later, the Bobcats would score again, as fellow junior Paula Kennedy split the left side of the field and sent a cross that slipped its way into the net for her first goal of the season.

Jacob, who finished the game with three saves overall, would later leave the contest with an apparent leg injury. She was replaced by sophomore Lauren Viverito, who also added a stop.

The two goals were all that Quinnipiac needed, as a forceful defensive effort led by graduate student Kyla Miles and sophomore Beck Kiting broke up many opportunities that the Bulldogs managed in the first half. Senior goalie Jill Kelley made three saves, finishing the season with 71 total. The effort was her second shutout of the season, and came on a day when her fellow seniors were being commemorated.

“It felt really great, and we might as well go out with a bang,” Kelley said. “My defenders played well and we kept it together.”

Even as Kelley posted the shutout, Bryant (8-8-3, 4-5-1 NEC) did find the goal twice in the contest. However, both were called back amidst controversy as the referees signaled interference on the goal as heavy contact was made with the Quinnipiac goalkeeper.

Friday’s win marked the end of an era for several Quinnipiac seniors, including star midfielder Furtuna Velaj, who leaves the school with 93 career points. Leaving with her are Miles and midfielders Chelsea Smith and Kristina Del Mistro. Kelley will be eligible to play next season after missing her sophomore season due to injury.

While happy with the win, head coach Dave Clarke expressed disappointment over the team’s five-win season and not being able to play for an NEC title.

“It’s not the victory we actually thought it was going to be … we’re disappointed we’re playing at home on a Friday where we’re not supposed to be,” Clarke said. “Still, we’ll take it.”

In general though, Clarke believed there was much left to be accomplished with this year’s squad.

Nonetheless, the Bobcats close the season with just two fewer wins than last season, in which they finished 7-7-4 overall.  The team looks forward to what 2012 may bring. Kelley is one of the optimists.

“Day one is tomorrow,” the goalkeeper said. “Hopefully we’ll get better chemistry, and get an NEC championship like we deserve.”