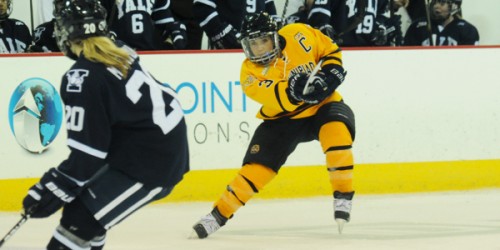 Quinnipiac senior women’s ice hockey captain Jordan Elkins doesn’t get many opportunities to score, but lately she has been a force in the Bobcat’s offensive attack.

Elkins scored her third goal in as many games to give the Bobcats an early 1-0 lead, and added an assist en route to a 3-0 victory against Yale.

“I have never really been a player to score at all, so it’s not really about who’s scoring but the fact that [the puck] goes into the net and we’re winning the game,” Elkins said.

Regan Boulton added another goal for the Bobcats (3-5, 3-0 ECAC) 40 seconds into the second period and Amanda Colin knocked in a rebounded shot from Elkins to extend their lead to 3-0.

Goaltender Victoria Vigilanti stopped all 13 shots on goal to record her third shutout of the season.

With 4:20 in the first period, Elkins fired a slap shot from just in front of the blue line at the 4:20 mark in the first period. Yale (0-5, 0-2) goaltender Genny Ladiges initially stopped the shot, but the puck slid behind her and into the net.

“It obviously feels good [to score], but I could care less if [goaltender Victoria Vigilanti] is putting them in the net,” Elkins said.

Friday was also Elkins first home game, as she missed the first homestand recovering from surgery she had in the offseason.

“My whole focus this year has been doing the best that I can do with what I have available,” Elkins said. [The game] has put me back in my normal condition.”

The Bobcats struggled early in the season, starting the season 2-5, which included two losses to Maine in which they held three-goal leads. But now the Bobcats find themselves on a three-game winning streak with all three wins coming against conference opponents. Quinnipiac head coach Rick Seeley feels they are different team now than earlier in the season.

“We played solid and got better every period,” Seeley said. “I don’t think we had any concern about losing the lead tonight.”

Elkins also sees a difference with the team opposed to the start of the season.

“We’re working better as a team, on and off the ice,” Elkins said. “We have a lot more support of each other when there’s a breakdown, even if there’s not a breakdown if someone is doing a good job or has good energy at practice we let them know and it gives them a lot of confidence.”

The Bobcats will put their three game winning-streak on the line Saturday, as they host Brown at 7 p.m.  at High Point Solutions Arena at TD Bank.