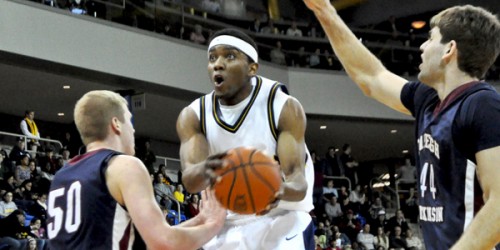 The Quinnipiac men’s basketball team was selected to finish fifth in the Northeast Conference preseason coaches poll announced on Wednesday. The Bobcats enter the 2011-12 season with seven freshmen and just three starters returning from last season, which they finished second place in the regular season with a 22-10 (13-5 NEC) record, before falling to Robert Morris in the NEC semifinals.

Senior guard James Johnson was also announced to the All Conference Team on Wednesday, the only Bobcat representative. Johnson was First Team All NEC last year and led the league with 84 3-pointers while averaging 16.1 points per game.

The Bobcats have combined for 45 wins while reaching a national tournament over the past two seasons. Last year they hosted a game in the College Insider Tournament, and during the 2009-10 season they went the program’s first-ever National Invitational Tournament.

The season opens on Nov. 11 at Mohegan Sun Arena when they face Fairfield in the Connecticut 6 Classic at 5:30 p.m.