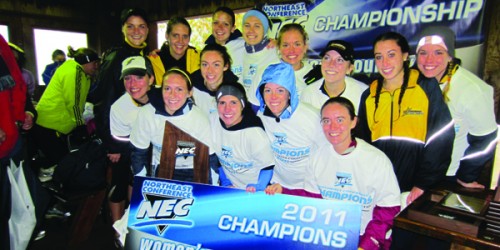 While the snow may have stopped Saturday shuttles to New Haven, there was one thing the weather could not freeze: the women’s cross country team. The Bobcats placed first in the Northeast Conference Championship Saturday at Holden Park, N.J. for an unprecedented seventh consecutive title.

“Last year we hit a historical number of six, and this year seven,” Quinnipiac head coach Carolyn Martin said. “We definitely thought we could do it, but there are always some doubts.”

Those doubts were quickly put to rest as Quinnipiac’s top seven runners crossed the finish line in under 20 minutes and took first place in the 5,000-meter race with 44 points. The 31-point gap between Quinnipiac and the second place team, Sacred Heart, only exemplified Quinnipiac’s dominance.

“I remember crossing the finish line and immediately going back to see where my team was. To see just a pack of yellow flying at you, words couldn’t describe the joy you felt of the moment,” said senior Morgan Roche, who finished first for Quinnipiac and fifth overall with a time of 19:02.70.

The flood of yellow Roche saw was a pack of Bobcats tight enough to have the top seven all finish within the top 25.

After Roche came junior Andrea Szarkowicz and sophomore Brianna Faust, claiming sixth and seventh place with times of 19:10.80 and 19:16.50, respectively. Sophomore Amanda Faust was only separated from this pack by three runners, placing 11th overall with a time of 19:23.90.

Sophomore Jessica Soja and senior Julie Lanning were next in 15th and 16th places with times of 19:33.70 and 19:35.00 respectively. The seventh Quinnipiac runner, senior Kaitie Kelly, crossed the finish line at 19:51.60 to place 24th overall.

“They all ran great,” Martin said. “It’s a really tough course. They’ve had faster times on that course, but because of the weather the times were slower. I thought it was impressive. There wasn’t any one runner that had a bad race; everyone had a great race.”

Given the historic results of the race, it is easy to forget that the Bobcats managed their seventh straight championship in a wintry state of mind.

“We could have let that bring us down and could have let it be a reason why we were not going to run as hard. Everyone really stayed positive,” Roche said. “I remember saying to the girls before the race ‘do not at any point in this race let the weather be a reason you slow down.’ Everyone really bought into it and believed it. The gun went off, and you could just tell we had a burst of energy inside us.”

Clearly, the energy lasted the entirety of the race, despite the start being delayed after the team had already warmed up.

“I think a lot of teams lost their focus,” Martin said.

Regardless of the snow, the Bobcats kept their composure and didn’t change their approach of the race, according to Martin.

This persistent nature will be key as the Bobcats look forward to their next challenge, the NCAA Regionals Nov. 12.

“This year it’s going to be tough to break through the top 10 in the region,” Martin said. “That’s certainly a goal. If we can beat where we were in the region last year, it would be great.”

In spite of the upcoming challenges with their next race, the Bobcats have proved themselves to be more than capable to tackle whatever comes their way.

Before they could reach the magic number of seven, the Bobcats’ top runner, Roche, had a “setback” early on in the season, according to Martin.

Although Roche was 20 seconds behind the first-place runner, Central Connecticut State’s Alasia Griebel, she still “really impressed us,” Martin said.

With that, Roche has something to take with her after she graduates that few runners can claim.

“Seven years,” Roche said in awe. “As a senior, I haven’t lost an NEC championship. It’s something that will stay with me for the rest of my life.”