This is me: The not-so-sweet life 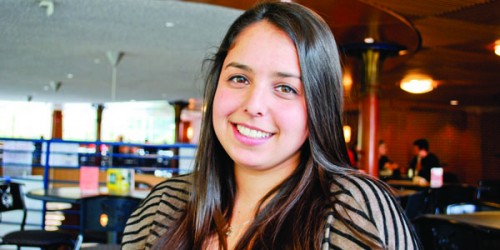 Jaime Kantor walks to the refrigerator in her bedroom and grabs one of several cold vials sitting on the top shelf. She handles it with care and gently places it on her desk. From the desk drawer Kantor pulls out a series of tools to assist her. After unscrewing the cap off the vial, she dips a syringe in the clear liquid. She then traps the fluid measuring the perfect amount. There is no second guessing. Kantor’s measurement is precise, as if she’s done this hundreds of times before. In fact, she must do it at least three times per week. Seconds later, Kantor pierces her upper left thigh with a needle and injects insulin in her body.

This is her only way to survive.Kantor, 21, has Type 1 diabetes. These routine shots of insulin help her maintain the stable blood sugars necessary for her to live. Ultimately, Kantor depends on friends and family to survive. They are instrumental in helping her cope with diabetes.

She sits comfortably cross-legged in her desk chair wearing a blue-gray T-shirt and black yoga pants. Kantor’s long, curly black hair is pulled back and rests on her left shoulder. She is at her most relaxed in the Perlroth suite she calls home. Her bedroom walls are lined with pictures of friends smiling. Kantor stares at the wall above her desk and offers a grin every time she glances back at them.

“Friendships just kind of happen. Those close friends that I have, I consider the family I choose for myself because they’re such special people in my life,” Kantor says with an infectious smile. “If it weren’t for them … then I wouldn’t be the person I am today. Every person I met has shaped me, and I’m grateful for that.”

“Mom, the mall’s over there. What are you doing?” Kantor asked.

“Well, Jaime, we have to take you to the hospital. The doctor found some stuff,” Kantor’s mother told her.

“I freaked out,” Kantor recalls. “I was 5 years old. Hospitals are scary.

“And I was mad we didn’t go shopping,” Kantor said without missing a beat.

Kantor’s family was at the hospital with her, including both her parents and grandparents. Kantor remembers people laying on her and poking her with needles.

She recounts hospital personnel wheeling in another child in “some metal cage” into her room.

“Not the time, Grandpa!” Kantor said with exasperation, wishing for it all to end.

Kantor said her parents explained the diagnosis as best they could to a child her age. Her parents told her she would need to take needles three times a day for the rest of her life.

“What 5-year-old wants to hear that?” Kantor asked, waiting for a response.

“Whether it be here at Quinnipiac or back at home, not only do I go for myself, but for the many other people I know who are affected with this disease,” Kantor said. “If they could find a cure I think it would save a lot of people’s lives. I know it would make my life easier and my parents would be so happy to see me not having to deal with this on a daily basis.”

There are 25.8 million people in the United States with diabetes, according to the American Diabetes Association. Approximately 1 in every 400 adolescents has diabetes. Only 5 percent of all cases have type 1.

Type 1 diabetes is usually diagnosed in children and adults, according to the ADA. The condition is defined by the body’s failure to produce insulin, a hormone needed to convert sugars, starches and other food into energy.

Kristina Wickman, a registered nurse at Brigham & Women’s Hospital in Boston and an adjunct faculty member at the Dotson Learning and Simulation Lab at Simmons College, said Type 1 diabetes is a chronic disease that requires daily injections of insulin, glucose monitoring, doctor visits, and exercise and diet modifications. She said a family’s medical history plays a key role in Type 1 diabetes.

“You have to have a genetic pre-disposition to Type 1 diabetes, and then something in the environment can trigger the disease, like a virus,” Wickman said. “Many different genes can influence a person’s risk. Because of this array of genes, Type 1 diabetes is not inherited in a clearly dominant or recessive manner. Instead, a person may have one gene that increases their risk.”

Kantor said her doctor believes chronic ear infections between the ages of 2 and 5 triggered her diagnosis.

Wickman, who does not treat Kantor, said the chronic ear infections, particularly if they were viral germs, could have triggered her diabetes if she had a genetic pre-disposition.

Type 1 diabetes must be treated with insulin, according to Wickman. This involves injecting insulin into a fatty piece of skin. It cannot be taken as a pill because the juices in the stomach would destroy the insulin before it could work.

“The point of insulin is to take the sugars from the food that you eat and carry them into your cells,” Wickman said. “If the insulin is not there, the sugars will just accumulate in your blood stream.”

Wickman said it is important for diabetics to have a strong support system because the diagnosis can be devastating, in some cases.

Kantor’s support system includes her family and friends. She recalls going to birthday parties as a child and being unable to eat cake. However, her mother brought her other goodies, so she would not feel left out. To Kantor, this only emphasized the special treatment she received as an only child.

“My parents always gave me whatever I wanted. I never had to ask for anything. And they still do, and I’m so grateful for that,” she said. “Sometimes I think it’s too much.”

Last April, Kantor needed her friends more than ever before. Lying prone in her bed, Kantor didn’t feel well. She asked her roommates for help.

“Jaime, where is your machine? Let me test your blood sugar,” Kantor’s roommate Addie Koehler suggested.

It was the first time Koehler had ever lived with someone with diabetes, and she did not know what to do. Luckily, Koehler had seen Kantor prepare the insulin a few times in the past. Koehler replicated the process with Kantor instructing her every step of the way.

“I definitely feel [Addie] feels like she was able to take care of me for once instead of me taking care of her,” Kantor said.

In her senior year at Quinnipiac, Kantor keeps busy in the athletic training program. Quinnipiac alumna Melissa Gramuglia mentored Kantor in her program last semester. She made sure Kantor completed her proficiencies and answered any questions for her.

Most importantly, Gramuglia became another member of the support system for Kantor inside and outside of the program.

“She totally puts herself before others. I know for a fact she’s been there for me when I’ve needed her,” Gramuglia said. “She has to be one of the sweetest people I know.”

Kantor may have adopted that sweetness and selflessness from her nurse when she was young, Susan Bernstein. Bernstein ran a diabetic camp, and she too suffered from diabetes. Kantor vividly recalls the “beautiful” pond and “gorgeous” flowers next to her house and the butterflies who made the nurse’s garden their home.

Kantor is visibly moved when she mentions Bernstein, and it’s clear she hasn’t thought of her in awhile. But on this day, Kantor remembers the one woman who did everything for everyone.

“It’s just a simple, peaceful time in my life despite everything else that was going on,” Kantor said.

Kantor mentions how much Bernstein helped her mother, especially in the beginning of her diagnosis. They kept in contact until she passed away a few years ago.

“It kind of broke my heart. She was so selfless,” Kantor said. “She wanted things to be better for us than they were for her. She was just a fabulous woman and I feel lucky to have been able to meet her.”

In the same way Bernstein changed Kantor’s life, Kantor has left an indelible impression on Alexa Rizzardi. Rizzardi and Kantor just became friends last year, but their friendship is already quite strong. Rizzardi met Kantor as a sophomore and felt she was a missing piece in her life.

“She is one of my best friends at Quinnipiac. My whole Quinnipiac experience really started when I met her,” Rizzardi said. “My whole life kind of changed.”

Kantor’s candid dialogue about her own life is comforting to Rizzardi.

“She’s really open about her own life,” Rizzardi said. “You can ask her questions about anything in her life whether it’s her diabetes or anything, and she’ll answer it truthfully.”

It is Kantor’s honesty and giving personality that stays with those who befriend her.

“Out of everyone, me and Jaime had a different relationship,” Koehler said. “We would always have our talks. I think that brought us closer together as friends. She is always there for you when you need her.”

Kantor completes the injection, looks up and smiles. She picks up the vial from her desk, screws the cap back on and walks to the refrigerator. The remaining insulin is placed in its proper location. Kantor glides back to her chair, sits down and rests her head on her hand. The room is silent for a few moments until she unleashes her trademark giggle. Her phone then begins to ring.

She excuses herself. It’s Koehler on the other end of the line asking when it might be a good time for her to visit Kantor later in the day. Kantor’s effervescent and bubbly smile shines throughout their brief conversation. It’s clear how much Kantor relies on her friends just as much as they count on her.

“If I can make somebody else happy or make their life a little bit better through my own experiences – that makes me happy,” Kantor said. “I don’t really tend to do things for myself; I like to do more for others. That truly gives me some happiness.”