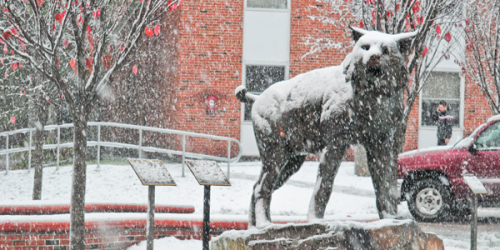 Kim Green
The unexpected nor’easter that swept the East Coast on Saturday has some Quinnipiac students with no electricity and limited transportation for their Halloween festivities.The unseasonable storm has left more than three million from Maine to Maryland without power including more than 800,000 Connecticut residents, according to Fox News.  Although many communities only received a couple of inches of wet snow, the weight on the trees still covered in Autumn leaves proved disastrous as power lines were toppled.  Connecticut Light & Power said that it may take up to a week to restore power.

“I lost power at 7 a.m. on Sunday morning,” said Kristy Suppe, a senior living in Cheshire.  “Connecticut Light & Power called us on Monday and told us we should be be prepared to not have power for seven days.  I am going from place to place living on friend’s couches because the lack of heat is making for an uncomfortable living situation to say the least.”

Suppe’s roommate senior Anna Raso said they received a phone call from their landlord Monday morning on behalf of the town requesting a clean sidewalk for trick or treaters.

“We have a big sidewalk and we had to hack the ice with a hammer for the kids,” Raso said. “Our whole neighborhood has no power. Once its nighttime, there’s no street lights and it’s really dark.”

In a press release from the town of Hamden, as of Sunday 25 Hamden roads are impassable due to utility lines entangled in trees with the largest concentration of power outages on Shepard Ave., where many Quinnipiac seniors reside.

“We live off of Shepard, and at about 11:30 on Saturday night in the middle of our Halloween party, with about 40 people who managed to make it there through the snow, the electricity went out,” senior Chris DeFranco said.  “We were suppose to have over 150 at our house, so we were left with untapped kegs and 20 people staying the night.  One of our guests even had their car stuck in our yard for two days.  We still are without power and heat.”

The storm also affected students residing on the York Hill and Mount Carmel campuses causing them to rethink their weekend plans.

On Saturday, residents received an email from Ed Rodriguez, assistant chief of security, informing residents the shuttle service to Hamden and New Haven has been shut down as of 4 p.m.

The decision came after security received word from the Governor’s office and the National Weather Service that the roads were no longer safe for travel, Chief of Security & Safety David Barger said.

The cancellation left many who were planning on traveling to New Haven to stay in over the Halloween weekend.

“My roommates and I were planning on going to Toads on Saturday night but then shuttles were canceled,” senior Danielle Cascersari said.  “We would have gone to a local house party or a bar but driving was so bad that a friend of mine got into an accident going down York Hill so we were all scared.”

But Cascersari made the best of the inclement weather.

“We had a party in our room and had a great time.  We ended up getting in some trouble with Residential life but it was so worth it because it’s my last Halloween at Quinnipiac.”

Although the town shuttles were stopped, shuttles still ran between the York Hill and Mount Carmel campuses. The service ended early at about 1:30 Sunday morning.

“The shuttles stopped early on Sunday morning going up to York Hill because the road leading up to the campus became hazardous and we wanted to keep the students and staff safe,” Barger said. “A storm like this was an anomaly and we are just hoping this doesn’t happen again so early in the season.”

The storm’s lingering effects on the Quinnipiac community outlasted the snow that quickly began to melt on Sunday.  At approximately 12:30 a.m. on Monday, York Hill residents were left without power until 2:30 a.m.

“The power went out fairly late Sunday night, so it didn’t really affect me, I just went to sleep,” said Francesco Compagnino, a Townhouse resident. “Luckily the heat was still working.”