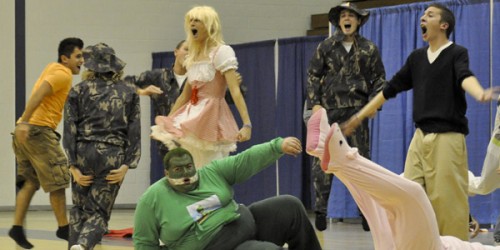 The brothers of Delta Tau Delta won Greek Week 2011, a series of competitive events among the fraternities and sororities held last week, after they took first place in competitions such as the Penny War Challenge and Lip Sync.The winners were Delta Tau Delta in first place, Kappa Alpha Theta in second, and Pi Beta Phi in third. 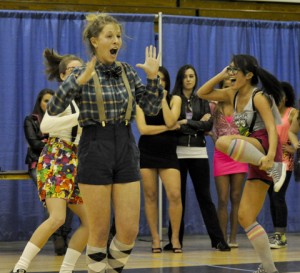 Lip Sync was the favored event for most Greek life members. The chapters presented 90s themed performances with music from the Spice Girls and ‘N Sync, and made references to their favorite childhood movies. It was a night of nostalgia for chapters and their supporters in Burt Kahn Court Friday night.

Delta Tau Delta stole the night with its “Toy Story” storyline featuring Andy’s dream of what happened to his toys after he gave them away. The fraternity practiced for about three weeks, according to Delt member Josiah Feigleson.

“It’s awesome [to win]; it feels so good,” Goldberg said. “We’ve worked so hard for this. Everyone put on a great event, but in the end, our hard work got achieved, it got achieved! Yea!” Goldberg shouted to his brothers.

“I’m excited, I can’t even talk right now,” George Buahin of Delta Tau Delta said. “A lot of good momentum for our fraternity and our chapter. We came a long way for this.”

“Greek Week is the best week of the year for everyone in Greek life at Quinnipiac,” Goumas said. “I thought it was amazing; everyone did an amazing job and I was absolutely impressed with every one’s routine and it was great.”

Thursday night Greek Week’s Greek God/Goddess 2011 took place. Pressure was high, because for the first time there would only be one winner, rather than both a winning ‘God’ and ‘Goddess’.

“I thought it was insane and I didn’t even expect to be up on stage in the first place,” Mandell said. “I was pretty nervous the whole time and I get really jittery in front of crowds, but I wanted to go out there and have fun and I did the best I could. The talent [was my favorite part] because I got to be myself and basically I got to have a great time with it.”

Mandell had a standing ovation for her talent portion performance, a comical interpretive dance to Adele’s “Someone Like You” with four other ballerinas in colored tutus. 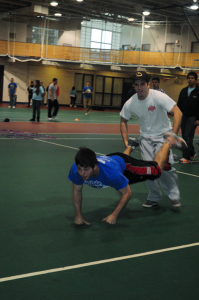 “Ariel killed it,” Associate Director of Student Center and Campus Life for Student Organizations Erin Twomey said. “You don’t get any better than interpretive dance.”

Martin earned her second place win for her gymnastic talents of jumps and flips and moving splits across the stage. Chamish sang and danced like Frank Sinatra in a cover of Sinatra’s classic “Come Fly with Me,” wearing a feathered top hat and a white coat in an intense atmosphere of stomping fraternities and screaming sororities.

“I’ve been anticipating [Greek God/Goddess 2011] for a while and I didn’t really want to do it but when I was out there it was a lot of fun,” Chamish said. “Everyone in my fraternity told me I was the one doing it and wanted me to do it. It was something different and it was a lot of fun.”

“It was great with a lot of support for every organization,” SGA President and Sigma Phi Epsilon Brother Ben Cloutier said. “It’s great to see everyone up there, they did a great job. There’s been a lot of participation by the organizations [this Greek Week]. It’s been fantastic.”

Greek Week 2011 was proven successful in its mission to unite Greek Life members across each organization.

“It really brings the community together instead of being separate chapters,” Tamar Aroyan of Alpha Chi Omega said.

“We’re competing against each other and you want your chapter to win, but you come together and cheer for each other and become friends with the other chapters,” Teresa Santos of Alpha Chi Omega said.

The banner contest first place winner with 433 votes was Alpha Delta Pi, in second place with 427 votes was Kappa Alpha Theta, and in third place with 309 votes was Phi Sigma Sigma.

Lip Sync winners were Delta Tau Delta with their creative storyline of “Toy Story” characters in first place, Sigma Phi Epsilon and their presentation of “Behind the Music” in second place, and Pi Beta Phi of typical high school crowds in third place.

The longest competition in Greek Week was the Penny War Challenge which raised $1,000.97 for the Susan G. Komen Breast Cancer Foundation. Chapters get one point for each penny they donate, but when silver coins or paper money are donated, points are subtracted according to the money’s value. Delta Tau Delta came in first place, Tau Kappa Epsilon came in second, and Pi Kappa Phi came in third.

Greek Week host Jaime Mor said it was “the most flawless Greek Week and the closest run of all time at Quinnipiac.”