New Haven and Hamden shuttles canceled, some students without power 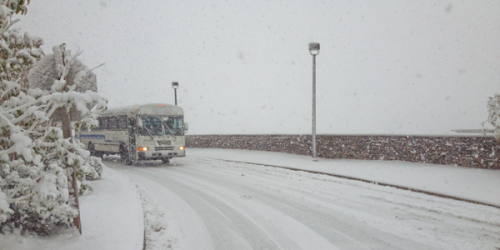 All shuttles to New Haven and Hamden will stop running, according to Quinnipiac security. This leaves many hoping to celebrate Halloween in New Haven disappointed and some without power.

“It was really disappointing to find out that Quinnipiac shuttles aren’t running on Halloween weekend. Especially because everyone was counting on Toad’s to have one of the biggest Halloween parties in the area,” junior Alyssa De Visser said.

Other students are having bigger problems than missing out on their night out, with some areas of Hamden losing power.

“Living off campus has its perks but losing power during a snow storm or hurricane is miserable,” senior Maria Kraft said. “I’m using my phone for Internet and we have small flashlights and candles from when Irene hit. We would go to York Hill but we don’t want to leave our apartment.”

The York Hill, Westwoods and Whitney Village shuttles will remain operating throughout the evening.

The storm is expected to last until 3 a.m., accumulating up to half a foot of snow according to the National Weather Service and the Connecticut Department of Emergency Management and Homeland Security.