This is me: Behind the veil 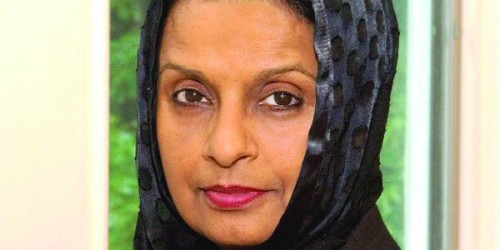 Shamshad Sheikh walks through the Mount Carmel Dining Hall in search of the student she is meeting. She doesn’t know what the student looks like because the meeting was arranged via email. But the student can easily find her in the crowd, even though they’ve never met. He knows that she will be one of the very few women wearing a Hijab on campus.

Sheikh does not hide behind the veil. She is inviting and welcoming; excited to meet, teach and learn from new people.

“I like to meet my students in the cafeteria downstairs,” Sheikh said. “They’re not used to seeing a Muslim woman walking in the cafeteria. But I said ‘if I just sit in my office, how am I going to know the students?’ I have to get out. So I walk around, I sit with the students, I eat with them, I have tea or coffee with them and try to establish relationships with the campus faculty and staff and the students.”

Sheikh is very busy in her new position as Quinnipiac’s Muslim chaplain, meeting with students, speaking to classes, and planning community events.

“My name is a little bit difficult, you know, Shamshad,” Sheikh said. “So the students just call me Ms. Sheikh, that’s fine with me too. You have to go and open the door to them. And that’s what my goal is, to reach them so they can feel comfortable to come and talk to me on any topic they need to. It doesn’t have to be religious advice; you can come and talk to me about anything. My main goal if you’re disturbed or upset is to bring comfort in you.”

Her fellow chaplains in the campus ministry recognize her care for students.

“I don’t think there’s anyone better [for the position]; she is amazing,” said Rev. Susan Fowler, Quinnipiac’s Protestant minister. “I see what she does, we’re right next door to each other. She constantly puts the students first.

“Whether they come with a concern about school work, or religious issues, or just issues with being a student on campus, or being Muslim in this country, she is always available. She is a great advocate. She is probably one of the most compassionate people I know.”

Sheikh wanted to come to Quinnipiac because she wants to help Muslim students find a way to live their religious life while being a part of the Quinnipiac community. Most Muslim students commute to campus, go to class then go back home, she said.

“They need a place to come together to get to know each other, to celebrate holidays,” Sheikh said. “See, this is what we do as a Muslim. They didn’t have that and I thought it would be a good place to bring my passion to work with people. I’m hoping that now they will remember now they have a place that they can feel a home away from home.”

Sheikh was the first female Muslim chaplain at any college in the Northeast. Most recently, Sheikh worked as an associate university chaplain at Yale University. Before coming to Connecticut, she was Muslim chaplain at four Massachusetts colleges at the same time—Mount Holyoke, Amherst, Springfield and Hampshire colleges.

“I’ve been doing the job for the last 15 years,” Sheikh said. “It may not be the same campus, it’s been many different campuses, but I do understand how every campus has different culture. I have a very clear understanding of how to work with each group on campus.”

There are close to 100 Muslim students at Quinnipiac, and she wants to help build relationships among the students on campus.

“When I came here, they said ‘We don’t even know, Shamshad, that we do have Muslim students on campus.’ And I said, ‘You know Muslim students are not going to have this written on their forehead. We keep our religion private, because we practice for Allah, our prayers are for Allah, we do not show anyone,’” Sheikh recalled.

She said she wants to make all students aware of Muslim holidays in case they want to celebrate them. She recognizes that Muslims are very diverse and have many different traditions. Sheikh does not want to impose a set way of practicing religion because she is here as an adviser. Every Friday at 1 p.m., SC227 serves as a prayer room for religious service called Juma prayer.

The events Sheikh plans are open to all students, and she hopes that students of different faiths will attend to learn more about Muslim traditions.

“She does want to unite,” said Diane Ariza, associate vice president for academic affairs and chief diversity officer. “She is about bringing people together and having conversations and I think that is most needed for the whole community and proving a service to our Muslim students.”

More than 50 students came to the Sept. 1 Eid ul-Fitr dinner that Sheikh planned, which celebrated the end of Ramadan. The next religious event Sheikh plans to hold is Eid al-Adha, an important Muslilm holiday, on Nov. 12 in Mancheski Executive Seminar Room at 5 p.m.

She wants to mix up the events and include non-religious outings as well, including possibly planning a ski trip that may introduce the sport to international students from warm climates.

She and Rabbi Reena Judd are planning Jewish-Muslim Dialogues where they will choose a common topic in the Torah and Koran. Sheikh said there are surprisingly many similarities in the oft-conflicting religions.

Judd served more than three years in the Israeli army and fought in the first Lebanon war. She says it is important for Jews and Muslims to get to know one another.

“Our cultures don’t really get along, how can all this baggage of our disagreements really tell when I see who you are?” Judd said. “The more people you know, the harder it is to be bigoted. You have to care about who they are and then it’s difficult to be a bigot.”

In her first 5 weeks at Quinnipiac, Sheikh was invited into many classes as a guest speaker, including a graduate biology class and a QU101 class.

“The teachers that are teaching this, the majority of them don’t have overseas experience,” Sheikh said. “You have to be in that country in order for you to talk about them.”

In the last few years she has traveled to Egypt, Pakistan, the United Kingdom and other European countries.

Sheikh’s only chaplaincy is now at Quinnipiac, but she also teaches Islam elsewhere two days a week. Next semester she hopes to teach a QU seminar course about Middle Eastern studies and Muslim Women in America.

“I think there is a great need here, and If I can offer that, I’d be happy to,” Sheikh said. “I know I have gone to a couple of classes and they are teaching that. They say ‘you can do a better job, Shamshad, coming from that background.’”

The Office of Multicultural Affairs tried to handle Muslim student’s requests for religious events and support, but there was no one to handle these needs in a thoughtful way, so Sheikh was hired to lead the Muslim students and teach others.

“There is a huge demand—not just from Muslim students—but from others who want to know more about what do Muslims and Islam play into the role of Quinnipiac,” Ariza said.

Sheikh values each day based on her belief that you never know if you’re going to live another one. She believes every person she meets can teach her something, and Sheikh said she never stops learning.

“Every day when I go home I ask myself ‘what did I learn today?’ It could be from young child, it could be from a student, it could be an adult or it should be my experience; there is always a learning,” Sheikh said. “Working with student as a chaplain has taught me a lot and that really helped me do interfaith work in the Philippines.”

She was invited by the U.S. State department to go with the delegation to the Philippines to work on interfaith issues in the southern part of the country.

“That is the part of the country that has a majority Muslim population,” Sheikh said. “The whole Philippines is Catholic, but that certain part, they are having serious issues and problems.”

Sheikh was born in Pakistan and has a Bachelors and law degree in Islamic Law. In 2008, she was elected Vice President of the National Association of College and University Chaplains. She also started a foundation helping women in the community who have suffered from domestic violence. Sheikh volunteers at a hospice, “spending time with people who are struggling to live in this world.” She also helps refugees from Iraq, of which there is a large population in New Haven.

“I believe in giving. My word, my energy, my skill, anything that would be useful to anyone I am willing to give,” Sheikh said.

Quinnipiac’s Rabbi Judd has been friends with Sheikh for years and recognizes her generosity.

She’s a really great lady, in Jewish we call her a Mensch—that is a person of ethnic culture and substance. She gives above and beyond,” Judd said.