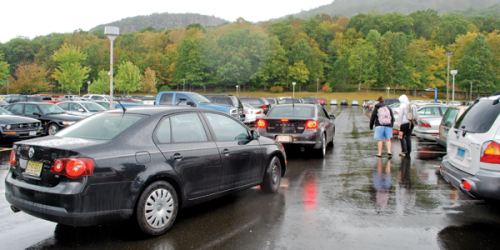 Parking privileges are getting better for seniors while juniors will soon be forced to the curb, waiting for shuttles to take them to class.

Despite telling Hamden’s Planning and Zoning Commission on Sept. 27 that juniors would be ticketed for parking in North Lot during weekday peak hours, Chief of Security & Safety David Barger clarified Monday that juniors will not be sanctioned until further notice.

Barger and his team are still reviewing all parking regulations and familiarizing the new assistant chief of parking & transportation, Ed Rodriguez, with the plans.

Rodriguez will replace Harry Needham as the new assistance chief for parking & transportation and that the move was strictly for operational needs, Barger said. Needham’s new role is assistant chief on regular shifts.

Barger said Monday that by the end of this week, there will be new parking regulations on MyQ, and the new rules will begin to be enforced.

York Hill seniors were issued new decals on Tuesday and Wednesday in preparation for the expected North Lot regulations, according to an email sent by Dennis Lue Yat to York Hill residents. In addition, the new decals will grant York Hill seniors parking privileges for the surface lots located outside their residence halls.

Barger and Vincent Bond, vice president of student concerns for Student Government Association, have been in talks throughout the summer to open up a better parking situation for seniors at York Hill.

Students were irritated by the delay, hoping for a more convenient parking system.

“Last October when I decided I would be living up at York Hill, I was under the impression that the lot in front of Eastview would be open for seniors,” said Andrew McDermott, a senior residing in Eastview. “After a few months of waiting, I am happy that it finally is.”

The delay was due to the unfinished construction surrounding Eastview, Barger said, in addition to construction equipment that was left in the new parking lot.

“The parking lot was not completely finished by the end of the summer,” Barger said. “When the Eastview building began to be occupied, the construction equipment was still in it. The islands had to be completed, and we waited so students could safely park their vehicles in there.”

Barger said the Eastview parking lot was completed in the last three weeks, and in that time, he and Bond began to move forward in their new parking plans for seniors.

“For the senior housing experience, we try in any way possible to make it better,” Bond said. “We try to make improvements each year, and maybe next year we will have more parking flexibly for juniors. It’s all about progress.”

On days with inclement weather or during sporting events at the TD Bank Sports Center, security will require students to move their vehicles to the parking garage. Bond said this will only happen eight or nine times during the winter sport season. If vehicles are not moved, they will be ticketed and towed.