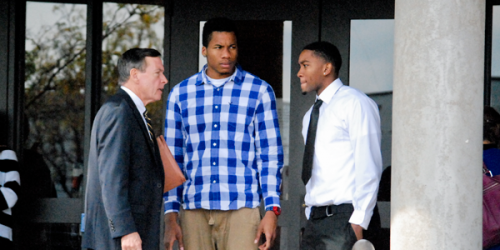 “It’s working its way through the process,” Lynch said. “There’s some more information Hamden Police will be getting up to the state’s attorney’s office.”

Hamden Police were unavailable for comment at this time.

“We just have a straight continuance of the case until [Nov.] 16,” Lynch said. “That’s the way these cases work themselves out.”

Azotam, a 20-year-old sophomore, and Johnson, a 21-year-old senior, were involved in an on-campus fight Sept. 18, according to Hamden Police, and pleaded not guilty to the charges at their arraignment Sept. 26. The students were sanctioned by the university on Oct. 6.

Quinnipiac head coach Tom Moore said he suspended the players once he heard of the incident and reinstated them once the university sanctions were lifted.

Both Azotam and Johnson were absent during Quinnipiac’s Midnight Madness event, but remain on the team’s roster for the upcoming season.

Katherine Rojas contributed to this story.