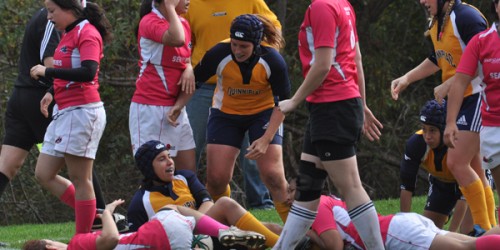 Matt Eisenberg
Christina DeJesus listened to her coaches and did exactly what she was supposed to do: touch the ball to the ground. She did and helped keep the Bobcats in playoff contention — but Quinnipiac head coach Becky Carlson wanted more.DeJesus scored the game-tying try with less than four minutes to go Sunday while there was no overtime in Quinnipiac’s 11-11 tie with Stony Brook at Alumni Field.

“I was only in for a couple of minutes and I made a difference in the score and the outcome of the game,” said DeJesus, a scrum half. “It’s the best feeling ever.”

“I definitely think we should have won,” a visibly dejected Carlson said. “It’s disheartening when it’s a tie. You want the W. You want something definitive that comes out of it, but unfortunately that’s not the way that the brackets work.”

Carlson and Stony Brook head coach Steven Galaris met after regulation and after talking with the referees, did not play an extra period.

“I definitely know they wanted to play,” Carlson said.

Marie Pescatore said she remembers when the teams first played each other in the spring season and Stony Brook won by a wide margin. She wanted redemption.

“It would have been nice to win this game, but they were lucky to get away with that one,” Pescatore said. “They came here expecting to kick our butts and we really took it to them and showed them that we were a different team.”

After both Pescatore and Elisa Cuellar touched the ball near the goal line, DeJesus took it and dove in to tie the game.

“I was thinking Coach was telling me in practice when you’re close enough just touch it down, so I thought ‘You know what, I am close enough,’ so I thought I’d go for it,” DeJesus said. “No one was in front of me, so it worked out.”

Krystin Orrico, who hit two penalty kicks in the first half, missed the ensuing conversion from the 22-yard line by the right sideline.

“I know she’s pretty bummed that she missed that last conversion, but I’m really proud of her,” Carlson said.

The Bobcats trailed the Seawolves (2-2-2, 2-2-2 MetNY) 11-6 at halftime and were unable to score until the closing minutes because of key turnovers near the goal line.

“It was pretty frustrating for us because we were in the offensive zone behind the 22 for at least 75 percent of the game and we just couldn’t put it in,” Pescatore said. “Finally once the ball went in the try zone, you could see us jumping and there was a big pile.”

Orrico nailed a penalty kick in the fourth minute of the game to give Quinnipiac an early 3-0 lead, and then hit another one with 10 minutes to go in the half.

“I cannot say enough about Krystin Orrico and what she’s done for the program in terms of earning those points when we really, really need them,” Carlson said.

Cathy Tang had two penalty kicks and set up Katherine Foran’s try for Stony Brook. Tang broke free of several Quinnipiac defenders and tossed the ball to Foran before going to the ground to give the Seawolves an 8-3 lead 27 minutes into the game.

The Bobcats have two non-conference games to end the regular season, playing at Eastern Illinois for the third Division I women’s rugby matchup in NCAA history Nov. 6.