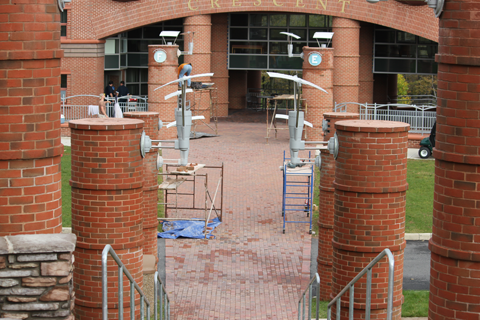 Over the next month, approximately 85 exterior lights installed on Rocky Top Student Center and Crescent at York Hill will be replaced, according to Jon Terry, assistant director of facilities for the York Hill Campus.

O&G Industries, Inc., the general contractor hired for the job, underestimated the amount of time it would take to ship the architectural area lighting fixtures originally planned for the project. Therefore, temporary wall pack fixtures were used for the time being, Terry said.

In order for students to move into Crescent at the start of the semester, temporary lights had to be installed. If the university had not installed the lights, the Town of Hamden’s Building Department would not have cleared the residence hall safe to house students.

Terry added that the only difference between the original and new fixtures is their architectural design. He is unaware of any price differences, as the pricing was part of the overall $300 million York Hill construction project.