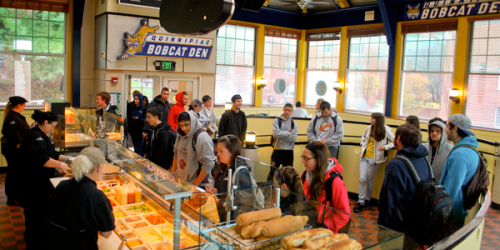 With new soft, yellow painted concrete and blue trimming with roaring bobcats on the walls, the Bobcat Den, more commonly known as the Ratt, is open for business.

The first students to test the new Ratt’s taste were sophomores Michael Viggiano and Danny Maggiore, who slowly entered Mondo Subs in awe of its open doors. Once Viggiano entered, he tweeted a photo to show his followers he was finally there.“We live in Mountainview and there were days we would not eat because the cafe is so far,” Viggiano said. “I’m just ready to get food.”

“It’s new, it’s clean, it’s bright,” Director of Chartwells Dining Services Joseph Tobin said. “The servers can serve and the cashiers can cash now, hopefully move the people in and out of here quickly.”

Variety was one of the biggest complaint and was always an issue for the Bobcat Den menus Tobin said. However now with the new equipment, variety is available allowing a simplified menu with different choices every day according to a six week cycle menu organized by the Director of the Bobcat Den Chris Schumacher, Tobin said.

The Ratt is going to do more “batch cooking” instead of having customizing meals Tobin said. There can be three to four orders at a time so it’s “ready to go and simpler.”

The Ratt won’t have “Pasta Wednesday” anymore, but instead a more consistent, variety of food.

“We’re not trying to do that anymore, however [the old menu items] will be available in the cycle menu” Schumacher said.

“So there will be one choice on one line [and so on] and it will be different everyday, because it gets too repetitive,” Tobin said.

The new kitchen has a six burner stove, stacked steamers, frialators, a new turbo flamed pizza oven, a dishwasher in the back, refrigerators under each counter top and a freezer outside, according to Tobin.

“It just evolved with the inspectors,” Tobin said. “Last week we said, ‘Let’s just say Wednesday at 4 p.m. and if we have to push it to Thursday then fine, but let’s get a date.’ But it worked.”

The new kitchen can “actually produce the food safely. With a new and updated facility, you can keep it cleaner,” including more room for the workers Tobin said.

“The old facility turned from a bar [The Rathskeller] into a little snack bar then into a pizza place,” Tobin said. “Its not the dingy old Rathskeller anymore.”

Once customers enter the facility, there is more space for a flow and open for traffic, Schumacher said.

There are four tables for sitting in one corner of the upper level and more in the lower level. There are four registers, including one centralized double-sided register, distant from the food stations.

The menu will evolve once surveys are taken with student input, Tobin said.

The new facility “should be good for at least 10 years,” Tobin said.

“It depends on us and the customers to respect the place and embrace it as a new facility and take care of it; keep it nice and clean and together,” Schumacher said.

The Ratt will be open tonight until 11 p.m. and resume its normal hours beginning this weekend, opening tomorrow from 4 p.m. until 1 a.m.