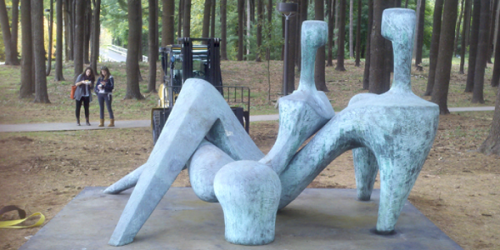 When I think about Quinnipiac, a lot comes to mind. Most of these thoughts are positive, especially when I think back to moments from my freshman year in Commons or Sleeping Giant’s abnormally beautiful fall foliage. I think of hockey, health science majors running rampant, crazy journalism professors, and au bon pain soup in the cafeteria. I do not think of art. And just typing those six small words makes me cringe.

After seeing the newly-erected statue in Pine Grove last week, and recovering from my initial shock and confusion, all I could say to myself was, “This is not Quinnipiac.” The statue, aptly titled “Facing Couple,” is a bronze metal creation by Itzik Benshalom that reeks of modernism and the recreation of human expression. The artist himself claims to use his art as a way to express and understand human emotion. That’s all well and good; however, I don’t see the same message in the flamboyant Bobcat sculptures that are peppered around our numerous campuses.

Quinnipiac University is not an art-oriented college. As a student who identifies more with the arts, I hate admitting to such a statement. But, I can’t help to think that it is undeniably true. When telling people I attend Quinnipiac they automatically assume that I am studying Physical Therapy, simply because that is our school’s most renowned subject to study, according to some people. In reality, I study Charles Dickens and media audiences. I take art history electives and write for the school newspaper. I am a student who represents our school’s liberal arts and communications schools, but a piece of obscure art is not going to get my story heard.

Prospective students interested in the fine arts should steer clear of the Bobcats. ‘Fine Arts,’ as well as ‘Music,’ is only offered as a minor, and even so, the few art and music classes offered have limited spaces available. Similarly, a number of these classes don’t have much depth—Quinnipiac’s understanding of music seems limited to symphonies and jazz. I often wonder if students ever listen to the fusion of alternative and independent rock music most coveted by our peers who run WQAQ. Our radio station boasts a lot of talent, with students who possess a broad range of musical knowledge. There are also very few creativity-based organizations to compliment clubs such as QUOTE and events such as “I Heart Art” and open microphone readings.

The artwork being featured on the walk towards CAS isn’t necessarily an eyesore or a disreputable piece of artwork—it just doesn’t mesh. The $75,000 statue was donated by the Lender family, who has been a constant supporter of the Quinnipiac community for years. But, I would have much rather seen that money go towards more art classes, supplies, music teachers, club funds, and student art projects. Wouldn’t you like to see more student artwork displayed in other areas besides one hallway in Tator?

The only positive I can see in this statue (besides, perhaps, its unintentional testament to releasing inhibitions or fornicating in a forest) is its grounding of hope in the future of the arts. There may just be a number of art professors and students who feel that the precariously placed statue is the school’s way of finally recognizing the arts as an important addition to any person’s education and repertoire of intelligence. It may be a physical encouragement for more students to embrace the arts, rather than push them to the side.

If anything, the statue has become the talk of the campus. We’ve all seen the phone snapshots on Facebook, with the captions verbally acknowledging just how thrown off every single student probably is at the sight of this piece of art. We all know it has some sexual undertones—those aren’t two giant high heels elevated above the ground. So, since the statue is undoubtedly out of place, students have the right to question its role on our campus. For now, we’re all a bit preoccupied with the hook-up going on in the woods. But, my hope is that students will soon start to question how the arts are portrayed here on campus on a daily basis.

“I mean, there’s nothing that embodies QU more than a statue of two faceless people doing it. So, bravo!” … “Riding the Bobcat will soon be replaced by riding the – uh – people riding each other.”

“It emboddies the cardinal principles of QU: Doing the Hippity Dippity after a night out at Toads.”