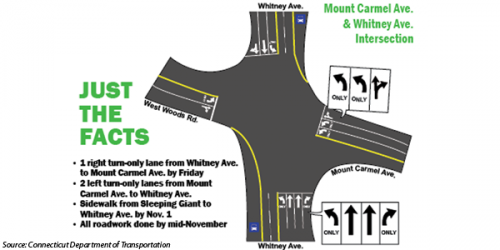 It will be a little easier to travel to campus starting this Friday, once new turning lanes are finally complete at the corner of Whitney Avenue and Mount Carmel Avenue, according to the Connecticut Department of Transportation. All construction at that corner will be complete in about a month.

“The goal was to establish turning lanes to maintain two through traveling lanes on Route 10 (Whitney Avenue) in both directions. This will be achieved by the latest [this] Friday,” Connecticut D.O.T. project engineer Steven Hebert said. “Therefore, the people who are stopping to take a left on West Woods or right on Mount Carmel will not be causing a backup on Route 10.”

Hebert says the new turn only lanes will help ease traffic congestion at this heavily traveled intersection. The previous configuration of the lanes often created backups on Whitney Avenue.

“Especially going to night classes at like 6:30 it’s always backed up on Whitney, so these new lanes will definitely help,” senior Amanda Chipko said.

Chipko and many other students who have a car on campus and commute to class daily are sometimes delayed by the construction activities.

The project is about 90 percent completed, and all the lanes will be in their final configuration by the end of this month. The rain has delayed some of the final construction process, Hebert said, but they are still set to finish all major construction by mid-November. Last week they put down final asphalt on West Woods Road and Whitney Avenue. Mount Carmel Avenue is still left to be paved.

“Well now you have two intersections that are aligned in one intersection instead of two separate intersections within 150 feet,” Hebert said. “We were able to eliminate one traffic signal by doing so. It should be a much safer situation when were all said and done, not only for the vehicle traffic, but also the pedestrian traffic crossing Route 10.”

Students will be able to walk from the Mount Carmel campus to Whitney Avenue without having to dodge cars, because a sidewalk will be constructed by the end of October, Hebert said.

The land in between the newly moved West Woods Road and the People’s Bank plaza will become town property. The Farmington Canal Heritage Greenway bike trail passes through that area and trees will be planted there next year.

“You shouldn’t see students walking in the roadway like you did before and during construction,” Hebert said. “Now people will have clean access to not only use the bike path, but take that bike path all the way to Sleeping Giant Park.”

The safety improvements for pedestrians should be achieved by the end of November, he said.

The major construction operations where lanes need to be closed, including paving roads, are completed at night to alleviate traffic, Hebert said. During the day there were regulations on when the D.O.T. could close roads to make sure traffic was able to keep moving during rush hour.

Junior Michael Auletto said he was excited that he won’t have to wait an extra 10 minutes because of lane closures at that intersection to get to class from his dorm on York Hill.

There will be some construction work that will be done next spring, including planting trees and adding some top soil. Hebert said spring construction will not interrupt traffic and that is the final construction that is planned for that area in the foreseeable future.