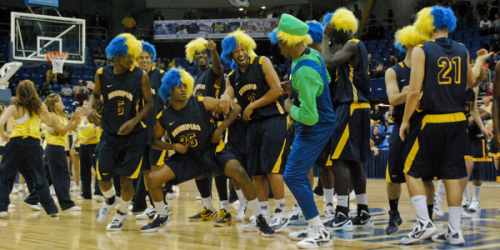 “The atmosphere was crazy,” freshman basketball player Terrence Bobb-Jones said. “Since I’m a freshman, it’s my first time actually being in the gym for a game-like attitude. It was crazy. The fans were crazy.”

When the time arrived for the basketball team to be introduced, the arena went dark as strobe lights were turned on. As the individual players’ names were announced, they ran onto the floor and took their place at half-court. The women’s team came out, followed by the men. Both teams showed off their skills as they did layups and competitions: 3-point shots for the women and slam dunks for the men, which Nate Gause wound up winning.

“This is a highlight for the girls,” women’s basketball head coach Tricia Fabbri said. “We’ve been talking about how they’re going to come out and the excitement we have going into the season just sets the tone. Every year we’re here to play for a championship and this starts this event. This gives us the energy and the motivation.”

Holding Midnight Madness during Parents’ Weekend gives families a chance to experience Quinnipiac athletics and the school spirit that accompanies it, according to Director of Athletics and Recreation Jack McDonald. Out of the more than 3,000 people who filled the stands, 300 students performed and 450 athletes were introduced.

“It brings all of us together,” Bobb-Jones said. “Everybody gets to know each other. It makes the kids, the fan base, come out strong. Now that they see us, they know who we are and they can come greet us and everything, so that will bring us closer together.”

“I love to see when the athletic department and the alumni department work together on a project,” Moore said. “You can see how good a job they do when they put their talents together to put together a weekend like this.”

Along with the basketball competitions, Quinnipiac spirit groups, such as Kickline, Ballroom Dancing, Step to Perfection, Sideline Cheerleading, Dance Co. and Dance Fusion performed on the court for the audience.

Check out the Chronicle’s Midnight Madness video and pictures.