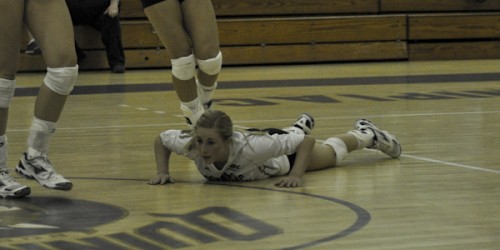 The Colonials outkilled Quinnipiac, 63-39, and lost to Robert Morris in four sets, 3-1, at Burt Kahn Court.

Though Quinnipiac freshman Brittanie Robinson tied a career-high with 11 kills, four different Colonials were in double digits, led by Hannah Veith’s 19 kills. A day after recording a season-low 13 attack errors against Saint Francis (Pa.), the Bobcats (3-18, 2-6 NEC) made 29 errors on attack.

“I think when we had hitting errors, you could see it,” Sparks said. “They were pretty balanced in all the sets. We only had one more error than them.”

Tracy Wright tied a career-high with 29 digs for the third time this season, while Krista Bennett had 13. Sparks credited the pair for replacing the injured Logan Riker this season.

“I think they’re both great defensive players and I really liked the way we played defense,” Sparks said. “I think a lot of teams would be lucky to have them both, and when we had them with Logan it was pretty incredible. But I think they do a lot of really, really good things for us and we couldn’t be where we are without them.”

Kayla Lawler had 32 assists and the Bobcats combined for seven total blocks – six assisted blocks by Olivia Grattan and five by Lawler.

“I think they’re disappointed because they played the game so well for the two sets and they were really disappointed there at the end,” Sparks said. “We have to work more on the serve receive and having confidence. We lost our confidence in serve receive and that’s why we fell apart at the end. I don’t think we should hang our heads because we played well in those two sets.”

Hannah Hoffman had 52 assists while five different Colonials were in double digits for digs, led by Lindsey Monger’s 19 and Erica Robb’s 18.