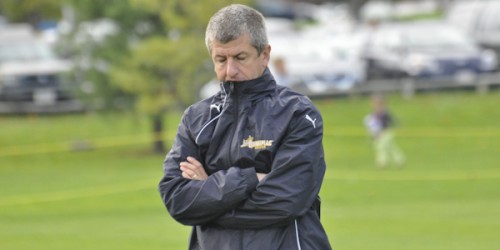 The Bobcats lost to Wagner, which finished ninth in the NEC last year, 1-0, at Quinnipiac Soccer Field.

“They lost to a bad team. You hate to say that, but that’s the reality of it,” Clarke said of his team, which couldn’t put any of its 16 shots past Wagner goalkeeper Kate Marcy. “We’re a better team than them and you can’t lose games like that. At the end of the day, player for player, we shouldn’t be losing to Wagner.”

“[You need to] get the ball down and play,” Clarke said. “They did at times. Furtuna’s got to put her chance away when she’s true one on one, as should Shauna [Edwards], but they didn’t.”

Kaitlyn Llewellyn scored her third goal of the season for the Seahawks (9-5-1, 3-4) when she headed the ball toward Quinnipiac goalkeeper Jill Kelley from a long pass by Amanda Sieferman. The ball went right to Kelley by the right post, but the ball went off her hands and above Kelley’s head for the goal.

“They capitalized. Jill made a horrendous mistake and that was it,” Clarke said. “It was one poor play in the game that decides it.”

Five of Quinnipiac’s corner kicks came in the second half, including two in the final five minutes, but the Bobcats could not capitalize. Beck Kiting took a corner kick with 41 seconds to go, but the ball was kicked out of the box by a Seahawk defender.

After Wagner had seven corner kicks in the first half, the Bobcats controlled the pace of the second half by not allowing them a corner kick and just allowing one shot on net. Clarke said the wind was a factor from the coin toss.

“If we won the toss in the first half we would’ve dominated like this,” he said. “You’re just hoping you can get a little bit of luck. We haven’t had a lot of luck in any of these games.”

The Bobcats have a quick turnaround when they make up Friday’s rainout against Long Island on Tuesday at home.