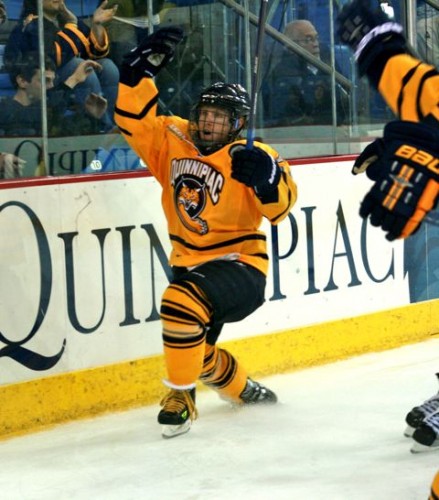 Spencer Heichman celebrates after scoring his first of two goals

Coming off his hat trick performance Saturday, center Jeremy Langlois added to his goal tally for the weekend by putting the Bobcats (4-1) on the board early, scoring from directly in front of the net on a Quinnipiac power play with 4:52 left in the first period. The goal was assisted by left wing Scott Zurevinski.

“I think tonight, like most nights, is to score that first goal right away and it gives you a lot of confidence,” Quinnipiac head coach Rand Pecknold said.

The Bobcats scored again early in the second period. Quinnipiac right wing Spencer Heichman, snuck one by Canisius (0-2) goalie Tony Capobianco from the bottom of the right faceoff circle, giving him his first goal on the year. The shot was assisted by Scott Zurevinski and Jeremy Langlois. The Bobcats dominated the second period offensively outshooting Canisius 21-4.

Quinnipiac sealed its win with a pair of goals in the third period. The first coming 14 minutes into the third period on a breakaway by Heichman giving him his second goal on the day. The shot was assisted by defenseman Mike Dalhuisen.

The second goal was scored almost immediately afterward by left winger Ben Arnt who poked one in from in from of the net. The goal was assisted by John Dunbar and Loren Barron.

Dan Clarke recorded his fifth career shutout victory, and first of the season, making 14 saves in the game.

Clarke also received assistance from his defense as they blocked 16 shots in addition to the 14 shots the Golden Griffins put on target.

On the other side of the ice, Capobianco stopped 40 of the 44 shots on target.

Another factor in today’s win was Quinnipiac’s success with the penalty kill, holding Canisius scoreless on four power plays.

The victory extends Quinnipiac’s win streak to four in a row as they take on a winless Bentley College team Tuesday.