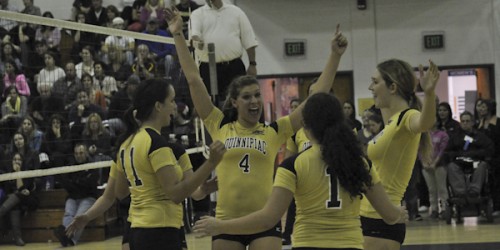 Taylor Payne said she felt nervous early in the first set when she saw the record crowd fill Burt Kahn Court for a volleyball game Saturday afternoon. Midway through the set, she settled down, but by the end she couldn’t keep her emotions inside.

“I’ve never seen this gym this packed in my life, and people were like ‘Oh my God, what are we gonna do,’” Payne said. “It was awesome. It felt so great to have so much support with all the fans.”

“I felt like the fans helped the momentum a lot and we were really fired up the whole game, so that helped us out,” Robinson said. “It was an exciting game.”

Though Payne had a team-high three kills in the first set without an error, she said she didn’t feel comfortable.

“Honestly, the beginning of the game I didn’t feel like I was being that successful and it was a little frustrating. I may have been a little excited,” she said. “I think I was just settled into it and thought I could do this and I wanted the win.”

“I don’t think we had any letdowns; we just stayed steady today,” Sparks said. “To do that in front of, I don’t know, 1,000 people is pretty exciting.”

Kayla Lawler recorded 30 assists and Tracy Wright notched 11 digs for the Bobcats, who only committed a season-low 13 attack errors, as opposed to 33 kills for a .200 kill percentage.

“We also went back to basics quite a bit on technique and how to approach and how to land, and I think that helped us a lot,” Sparks said.

Allen played for the third time since Sept. 16 and saw action in all three sets, as she recorded seven kills. Sparks said her return to the lineup was a boost for the team.

“She may not have the highest stats but she hits the ball so powerfully that teams don’t dare leave her alone,” Sparks said. “As she gets to know the game better, she’s going to get better and better, and that’s pretty exciting.”

Robinson recorded eight kills, and accounted for 2.5 blocks, including a block assist and a kill to help clinch the second set, 25-22. Sparks said Robinson worked in practice on making adjustments.

“We talked a lot this week about having our feet stopped so we can make adjustments, and also on the attacking, taking off and landing on two feet, that was the big difference for Brittanie Robinson,” Sparks said. “When she does that she can really crank on the ball.”

Amanda Zahumensky had 10 kills, Kierstin Kiser had 27 assists and Breanna Kochinsky and Brittany Stambaugh each had 11 digs for the Red Flash (7-15, 2-5).