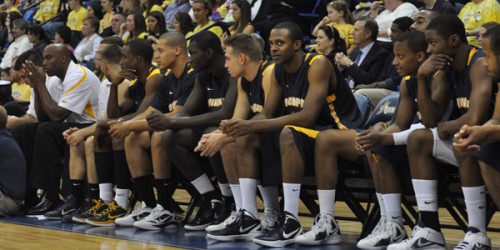 Three key men’s basketball players were noticeably absent from Friday night’s Midnight Madness event. Two of them were suspended from the team at one point, but all are still on the team, Quinnipiac head coach Tom Moore said after the event.

James Johnson, Jamee Jackson and Ike Azotam, three of the five current players who saw time on the court last year were not present for the team’s first full practice allowed by the NCAA, but Moore said they are on the roster now.

“As of right now, they are on the team.”

But they weren’t before.

Moore spoke to a JRN260 class on Wednesday and answered students’ questions about the team. Moore said to the class that once he heard what happened about the incident on Sept. 18 he punished the involved students.

“As soon as it happened I suspended them from all basketball-related activities from that point until I think Monday,” Moore said. “They had been on a team-related suspension by me [since] pretty much the day it happened.”

Once Moore heard of university sanctions, he took them off suspension.

“They received some university sanctions on Thursday of last week and we had no school Friday, so once I heard of the university’s sanctions I changed that,” Moore said. “I just reinstated them.”

Moore and the athletic department did not announce the suspensions publicly.

“In constant discussions with our athletic department, we didn’t choose to really say anything on it,” Moore said.

Moore said he could not comment on the university sanctions because of the Family Educational Rights and Privacy Act, which protects students’ privacy rights, but did say that he is working with the rest of the team and the athletic department  on further sanctions.

Moore said he did not know the players’ status for the Bobcats’ first game of the season, Nov. 11 against Fairfield.

Azotam posted on Facebook that he wouldn’t be at Midnight Madness, but said he would be ready for the season.

“Midnight Madness can’t handle me this year.. Ill see yall when it counts in November though #GoBOBCATS,” he posted about an hour and a half before the event began.

Azotam and Johnson were charged with third-degree assault and second-degree breach of peace from an on-campus incident that took place Sept. 18. Both pleaded not guilty Sept. 26, as their lawyer, Thomas Lynch, said that Johnson was assaulted the night before the incident and Azotam was misidentified.

Johnson was the team’s leading scorer last year, averaging 16.1 points per game. Johnson has played in every game since joining Quinnipiac and broke the program record for consecutive games played.

Azotam played in 31 of 32 games last year and was second in rebounds, averaging 5.4 boards per game. Jackson started all 32 games and averaged 6.3 and 4.9 rebounds per game. Moore said he thought that the two could fill the void left by 2010 Northeast Conference Player of the Year Justin Rutty.

“If they can improve like they’re supposed to, I think they’ll be fine,” Moore said in a phone interview Monday. “If they continue to develop, they can help offset the loss of Justin Rutty.”

Moore acknowledged that Johnson could be the team’s most important player for the season ahead.

“Right now [James Johnson] is probably our best shooter, scorer and perimeter defender,” Moore said. “There are very few kids in college basketball who you can put on the court for 36 to 38 minutes and really not have to worry about whether they get tired or not.”

Jamie Hill contributed to this story.