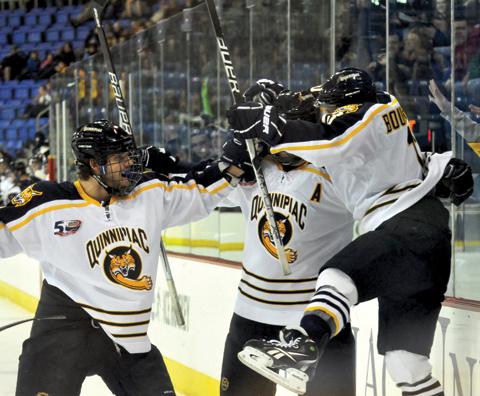 For many hockey teams a 16-win season can be considered a success. But not for the Quinnipiac Bobcats.

Last season the team went 16-15-8, its lowest win total since the 2003-2004 season when the Bobcats played in Atlantic Hockey, and were eliminated in the ECAC quarterfinals by Cornell.

But things look to get better for this season for the Bobcats.

Last year the Bobcats had 18 freshmen and sophomores on their roster, something which Pecknold feels contributed to the inconsistency of the team last year.

“At times we were immature emotional,” Pecknold said. “We feel like we’re going to grow out of that this season. Everyone’s a year older, a year bigger, a year stronger.”

That puts the Bobcats in a good position as they return almost the same roster as last year. They lost only four players, Sean Coughlin, Zach Hansen, Sami Liimatainen, and Pat McGann, to graduation. But only Hansen played significant minutes.

And while last year’s team was very young, this year the Bobcats sport a well-balanced roster. “We’re not an old team by any means, but we don’t have the youth we had last year,” Pecknold said.

The experience gained by the current sophomores and juniors last year will pay dividends this year, especially offensively. Last year, the Bobcats ranked ninth in the ECAC in scoring with just 95 goals.

“We had a lot of chances, we just couldn’t finish at times,” Pecknold said.

The Bobcats return all of their leading scorers, a group led by Scott Zurevinski, the Jones twins, Connor and Kellen, and Jeremy Langlois, to which gives Pecknold high hopes for a more potent offensive attack.

“We do have kids with good track records of putting numbers up so I think our offensive output will go up quite a bit this year.”

Zurevinksi, the captain, is playing for a NHL contract this season. Before last season, he was offered a contract from the Vancouver Canucks but turned it down. He finshed last season leading the team in points (25).

“He had a good year and then had an awesome playoffs,” Pecknold said. “We’re hoping that carries over into this year.”

The Jones twins arrived in Hamden last year amid much hype.

“We put too much pressure on Connor and Kellen as freshmen,” Pecknold said.

But even with all the attention Connor and Kellen put together successful freshmen years. Connor finished second on the team in points (24) and assists (15), while Kellen finished fourth in points (22) and third in assists (14). Pecknold feels that the Jones will be even better this year.

“With a year of maturity, they’re more confident,” Pecknold said. “They’ve learned how to play away from the puck better. They’re poised for big things.”

Pecknold and fans caught a glimpse of these big things in the first period against Acadia on Oct. 2, when they combined for two goals and two assists.

“They were dominate,” Pecknold said. “It was awesome. It was fun to watch.”

Jeremy Langlois had a breakout season last year. He led the team with 18 goals, including six on the power play, which also led the team.

While Pecknold and Bobcat fans may be looking towards the returners to carry the team this season, the Bobcats welcome some talented freshmen who can make an impact highlighted by Matthew Peca, a Tampa Bay Lightning draft pick.

“We had to battle really hard with other colleges and major junior teams to make sure he came here,” Pecknold said.

But like he and the rest of the coaching staff learned last year with the Jones twins, pressure could be a bad thing.

“He’s only 18 years old, so we don’t want to put too much pressure on him,” Pecknold said.

“We certainly feel that he has the potential to be a very good player for us.”

“Bryce is going to give us some size on that third or fourth line, along with some toughness” Pecknold said. “[He] plays hard, plays with an edge.”

Van Brabant gives the Bobcats a bigger body, something Pecknold felt was needed this year. And at 6-feet-3 inches, 205 pounds, Van Brabant is exactly what Pecknold was looking for, giving the Bobcats added size and strength.

“I thought at times last year we lack a little bit of size,” Pecknold said. “He’s going to be a nice addition to our lineup.”

The area where the Bobcats have a serious question mark is in net. Dan Clarke and Eric Hartzell split starts at the end of last year and into the playoffs.

“He’s very athletic, great feet, and he moves well, highly competitive, and works hard every day in practice,” Pecknold said. “I think he’s ready to have a big year.

But that doesn’t mean Clarke can’t step up and grab the starting job. Just two years ago Clarke was named team MVP, when he had .913 save percentage and a 2.52 goals against average. But he regressed a little last year and that allowed Hartzell to emerge.

“Clarkey was our starter two years ago and Hartzell kind of won the job away from him last year,” Pecknold. “It’ll be a healthy competition and we’ll see how that plays out.”

If Hartzell can have a good follow up to last year’s performance, it should be his job to lose. And as one of the top returning goalies in the ECAC, Hartzell should be able to carry the team when needed.

With several teams in the ECAC losing big name players and coaches, the Bobcats can be one of the top teams in the league. If everything falls into place, and a starting goaltender emerges, the Bobcats have a strong possibility of finishing in the top four in the ECAC. That would mean a first-round bye come playoff time.
Players to watch
Eric Hartzell (Jr., G) – The sophomore goalie finished last season ranked 15th in the nation in save percentage and fourth in the nation in goals against average.

With another year under his belt, Hartzell should be back ready to perform as well, if not better. If he does, the starting job should be his lose.

Scott Zurevinski (Sr., F) – Zurevinski’s production dipped slightly last year. He’ll be playing for a NHL contract this year after turning down an offer from Vancouver after his sophomore year. If the Bobcats are to go anywhere this season, Zurevinski will need to produce in his last year.

Jeremy Langlois (Jr., F) – Last season Langlois netted 18 goals (leading the team) after scoring only eight his freshman year. The Bobcats could have their first bonafide goal scorer on their hands if Langlois continues to improve. The Bobcats could also see Langlois reach the 20-goal plateau this season. He would be the first Bobcat to do that since David Marshall in 2008-2009.

Connor Jones (So., F) – Jones, along with his twin brother Kellen, came to Quinnipiac last season amongst hype and performed well. Last season jones scored nine goals and added 15 assists. But the Bobcats should expect more from him this season. With a year of experience under his belt, Jones should be ready to take the ECAC by storm.