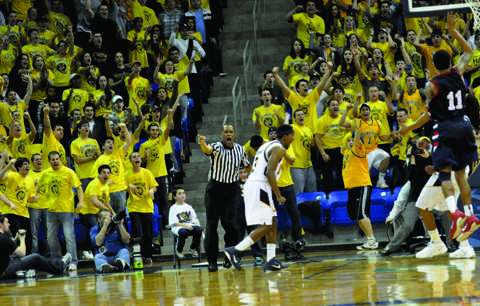 Last year the Quinnipiac men’s basketball team played seven games without 2010 Northeast Conference Player of the Year Justin Rutty due to injury. Now the Bobcats have to go a full season without him and eight other players from last year’s team.

The Bobcats enter the 2011-12 season with nine new players – eight freshmen – and two more who were on last year’s roster but did not play because of NCAA transfer rules.

“This year’s team is obviously going to be one of the younger teams that we’ve had,” Quinnipiac head coach Tom Moore said. “We’ve been spoiled a little bit the past couple of years because we’ve been kind of a veteran team.”

Quinnipiac’s bids in the conference tournament ended against Robert Morris the last three years – the past two at home by two points, 52-50 in the 2010 NEC Championship game and 64-62 in last season’s conference semifinals.

Rutty, the NEC’s all-time leading rebounder, graduated in May along with guard Deontay Twyman, who scored 12.4 points per game last year and played in all 65 games while at Quinnipiac.

Rutty injured his elbow before a Jan. 6 game against Monmouth last year and missed seven games, in which the Bobcats went 3-4. After he returned to the lineup Jan. 27 to face Robert Morris, the team won 10 of its next 11 games, including a six-game win streak to end the regular season.

“It was great for Jamee and Ike in a way because it gave them a dry run as to what life would be like without [Rutty], and I think it sort of helped them,” Moore said. “If they can improve like they’re supposed to, I think they’ll be fine. If they continue to develop, they can help offset the loss of Justin Rutty.”

Azotam drew comparisons to Rutty with his size and ability to get rebounds last year, but his status is unknown pending the university’s investigation of an incident that took place Sept. 18.

James Johnson, who led the team in scoring and was an All-NEC First Team player last season, was also involved, but the investigation is still underway and the two players are scheduled to return to court Oct. 24.

“It’s become something at Quinnipiac that we value and identify ourselves with,” Moore said. “We had a national rebounding average and that’s something we will build and make a point of emphasis. It leads to our team winning a lot of games and it’s something we can control.”

Azotam, a 6-foot-6 forward, averaged 5.1 points per game and was second on the team in rebounding with 5.4 rebounds per game, playing in all but one game for the Bobcats. When Rutty was a freshman, he averaged 7.4 points and 5.1 rebounds in 28 games.

“If you compare Justin Rutty’s freshman year to Ike Azotam’s freshman year, statistically per minute of play, Ike had more statistics than Justin in points and double-doubles and rebounds,” Moore said. “I think both [Jackson and Azotam] have great potential and both will be up for the challenge.”

This year there may be several other potential replacements for Rutty, who recorded a program-high 41 double-doubles in his Bobcat career. Freshmen Ousmane Drame, Marquis Barnett and Justin Harris, who are all at least 6-foot-7, are all capable of making an impact on the boards.

“Drame can be a really good defender and shot blocker at this level … [Harris] is big and strong and he’s got a pretty high IQ … [Barnett] can quickly help us in terms of physicality inside right away,” Moore said. “I expect them to add some improved depth in the front court.”

The Bobcats lost several other key players from last year’s squad, including Dominique Langston, who averaged 7.1 points per game, Lance Brown, who led the team in field goal percentage (53.8 percent), and Raheem May-Thompson, who played in 29 of 32 games last year.

Sophomore transfer Alex Jackson and freshmen Nate Gause, Zaid Hearst, Terrance Bobb-Jones, Evan Conti and T’Ziah Wood-Smith will all vie for spots in the backcourt, along with senior Kevin Tarca. Moore said Jackson, who last played for a junior college, can see more playing time right off the bat with his experience.

“He’s a versatile combo forward. He adds hardcore toughness to a young team and brings some veteran leadership even though he’s a new guy,” Moore said. “I think he’ll be ready to help us right away and I’m looking forward to working with him.”

Not new to the program, but new to the court will be Garvey Young and Austin Alecxih, who both attended Quinnipiac but sat out last season due to NCAA transfer rules. Young, who was on the 2010 America East All-Tournament Team for Vermont in 2010, averaged 7.4 points per game and four rebounds per game as a sophomore. Alecxih played in 14 games for UNC-Asheville in 2010.

Moore said Young will see plenty of time in the backcourt alongside Dave Johnson, who played the fourth most minutes for the Bobcats and led the team with a 2.3 assist-to-turnover ratio.

“Garvey’s got a chance to be one of the most important players because he’s got such a good résumé and so much quality experience already at this level,” Moore said. “I think he’s going to have an opportunity to be a major contributor here for the next two years.”

Both Johnsons are expected to see a lot of time in the backcourt for the Bobcats.

“Right now [James Johnson] is probably our best shooter, scorer and perimeter defender,” Moore said. “There are very few kids in college basketball who you can put on the court for 36-38 minutes and really not have to worry about whether they get tired or not.”

Moore wrote “52-50” in the locker room last year to use as motivation for his team throughout the season, signifying the loss that left the Bobcats so close to the NCAA tournament. Moore said he hasn’t yet figured out how to use last season’s two-point loss as motivation for this season.

“Every team has an identity and has a mission to get to the goal. We know what our goal is, but I don’t quite know what this team’s personality is going to be,” Moore said. “A year ago it was a no-brainer because we had a huge core of players from that team who were coming back, and this year’s team is made up of a bunch of different individuals.”

With all the new faces, Moore hopes the Bobcats can rebound from another tough loss and advance further than the CollegeInsider.com Tournament: the 2012 NCAA tournament, specifically.

“We’ll have a little less experience than the last two years, but I think we can more than make up for that with the enthusiasm on the scene and the improved athleticism on the scene, so that’s what we’re striving to do,” Moore said.
Players to watch
Jamee Jackson (Jr., F) – The junior forward has big shoes to fill with the loss of Justin Rutty, but Jackson has the potential to step up. In seven games without Rutty, Jackson averaged nearly 11 points and seven rebounds a game.

Jackson was seventh in the Northeast Conference in blocks last year and, with his 6-foot-7 frame, brings the same defensive presence.

Dave Johnson (Jr., G) – Expected to have a larger role on the Bobcats this year, Dave Johnson is primed to have a breakout season. Johnson was among the conference leaders in assist-to-turnover ratio last season and has the ability to distribute the ball all over the court.

When he takes matters into his own hands, he can score – he tallied 17 points against a talented Central Connecticut State team last February.

Garvey Young (Sr., G) – Despite not playing last season, Garvey Young gives the Bobcats a more experienced backcourt for the upcoming season. Young played 64 games at Vermont and was named to the First-Team All-America East in the 2009-10 season.

Coach Tom Moore said he expects Young to see a lot of time on the court and play in the key moments down the stretch.