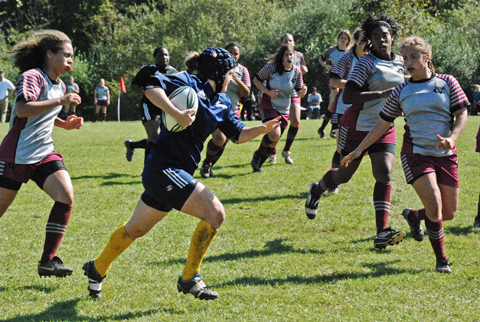 The Bobcats fell to MetNY foe, Vassar College, 38-5 on Saturday afternoon. The loss snaps a two game win streak for the Bobcats. Quinnipiac (2-3-0, 2-2-0 MetNY) gave up an average of 6 per game during that stretch.

Coach Becky Carlson pinned the loss on her team’s inability to capitalize on the positive aspects of their play.

“We were taking one step forward and two steps back. Over the last two games we were learning from our play and capitalizing, today we didn’t,” said Carlson.

Stretches of positive play were obvious from the Bobcats, but unable to be sustained between the backs and the forwards. The speed of the Vassar College Brewers (2-2-0, 2-2-0 MetNY) exploited that divide.

Andrew’s try came with five minutes remaining in the first half, making the score 12-5.

“Halftime killed our intensity, maybe if we scored earlier it would have helped us keep our momentum,” Andrews said.

Carlson said this fifth game of the season would be big for her team.

“The fifth game can make or break your season, today we broke,” said Carlson.

Next on the schedule is the only other NCAA Division 1 women’s rugby program, Eastern Illinois University. In their last meeting on September 18, Quinnipiac lost 24-0. Coach Carlson said the team has been watching film since then, in addition to being very familiar with the program already.

“We want to prove we have gotten better. We want a little bit of revenge,” said Andrews with a rye smile.