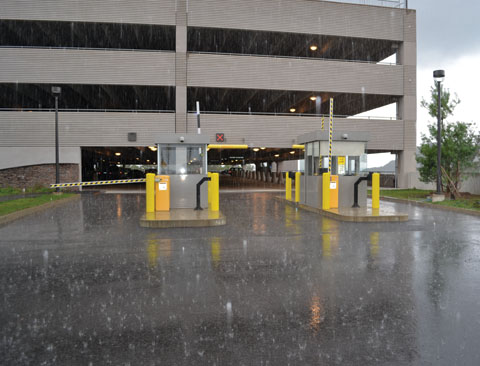 Within the next couple of weeks, the guessing game for York Hill residents will come to an end. According to Chief of Security & Safety David Barger, the gates to enter the parking garage on York Hill will be permanently down and security guards will be in place for evening hours.

Not every York Hill resident with a car has been entered into the system yet, further delaying the schedule for having the gates down. Security is always behind when entering student information into the system, Barger said.

The university scheduled a guard to occupy the security booth from 2 p.m. to 6 a.m. every day to ensure that students can enter and exit when the gates are down. During the day, cameras monitor the garage.

“I think security could be a little stricter during the day when there is a constant flow of people in and out of the garage without having to ‘check-in’ or swipe for entry,” junior John Phillip said.

While some students agree with Phillip, others don’t see the need to have a security guard at the booth while the gates down.

“I just don’t understand why they’re there when the gates are down, unless it’s for people who forgot their Q-cards, but then why not just forget the gates or the Q-card swiping machine and just have the guards open the gate?” junior Kristen Fetzer said. “I feel like it’s a waste of their time just sitting there. It’s a 4 by 6 (feet) cubicle. It can’t be very comfortable.”

Because of the higher number of students present at York Hill in the evening, compared to the daytime hours when they attend class on the Mount Carmel or North Haven campuses, the guards staff both the booth to the garage and the one leading to the dorms.

“Usually when I come back from class early in the day, the gate isn’t down,” junior Allison Juckett said. “So, when it is, I don’t always have my Q-card, and I have to rush to get it before holding up the cars behind me. I asked the guard what times the gate would be down after they started putting it down about a week ago, and he said during his shift was all he knew.”

Until the information for all York Hill resident-owned cars is entered into the security system, the gates will remain open during the day and closed at night with the security booths occupied by guards. Once Quinnipiac has the parking garage running smoothly, the only time the gates will be open is during hurricanes and snow storms, according to Barger.