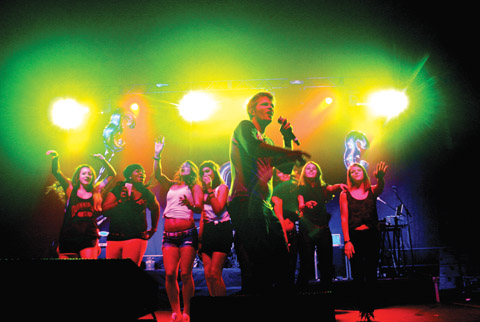 With less than half the arena filled, Hoodie Allen, Sam Adams and 3OH!3 took the stage before an eager crowd. The arena was filled on the floor, where students danced and cheered their favorite performers.With each performer on stage for about an hour, every act was timed perfectly, leaving anticipation high after each performance.

Allen took the stage with a simple setup: a drummer and a deejay. And that’s all he needed. His music drew cheers from the crowd.

Allen interacted with the crowd and taught them the simple lyrics to his song “James Franco.”

The best part of Allen’s performance came in the middle when he took out his electronic piano and performed Kanye West’s “Stronger,” while mixing in Britney Spears lyrics. Performing a well-known song was a smart move by Allen. Knowing that many people don’t know his song lyrics, he sang a song that allowed him to interact with the crowd. Overall, Allen set the stage perfectly for Sam Adams, the second performer in line.

In between each performer, however, the lights came on and disrupted the concert mood. As the stage crew set up the next act, it delayed the concert’s flow as people awaited the next performance. If the lights stayed dim and the music kept on pumping, it would have kept spirits up.

Adams proved to be the concert’s main attraction. Entering the stage to applause and screams, Boston’s Boy made the Bank come to life. Performing fan favorites such as “Coast to Coast” and “Driving Me Crazy,” Adams delivered a crowd-pleasing performance allowing everyone to dance and let loose. He also performed his crowd favorite “I Hate College,” and even referenced Quinnipiac’s beloved mascot, the Bobcat, in his lyrics.

Adams introduced some of his new music to the delight of the audience. He debuted his song “Rager” to thunderous applause. Throughout the his entire performance, students were seen mouthing the lyrics and singing along to Adams’ songs, creating an intimate setting between the small crowd and the well-known artist.

For the night’s final performance, 3OH!3 took the stage. Although some audience members left when Adams exited the stage to continue their night elsewhere, the band came on stage full of energy and excitement. With an impressive light show, showcasing school colors blue and yellow, 3OH!3 took advantage of the intimate crowd and put on a great show.

Performing hits “Don’t Trust Me” and “Starstrukk,” 3OH!3 proved to audience members the show’s main goal was to provide a good time. Even pulling a group of girls on stage for the performance of “My First Kiss,” 3OH!3 wowed the crowd with its high spirits and fun performance.

Despite the lack of continuity between each performer, each act provided something new and refreshing to listen to.

View photos from the concert here.