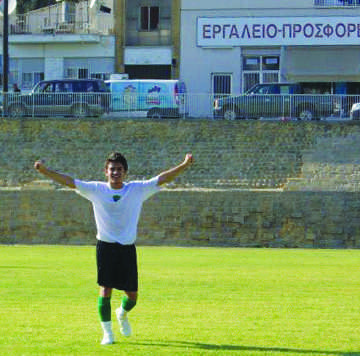 Marcos Spanos will never forget his first professional soccer experience, even though he has yet to play collegiate soccer.

What was a breakthrough moment for Spanos turned into a large hurdle to play in America for the Cypriot soccer player.

Spanos, a freshman from Cyprus, was originally on the Quinnipiac men’s soccer team, but due to NCAA rules and some miscommunication between him, the school and the NCAA, he is unable to play soccer this year.

“It was frustrating,” Spanos said.

Spanos came to Quinnipiac two years removed from high school not only for a chance to get a better education and play soccer, but also to leave behind the conflict in Cyprus.

According to Spanos, the Cypriot high school system requires high school graduates to serve two years in the military since the island is currently at war. The Turks invaded Cyprus in 1974, and the country has been divided ever since.

Spanos described his experience as “not good.”

Spanos would normally serve 11 hours per day his first year, waking up at around 6 a.m. for intense training. Through learning basic training and how to handle weapons, he said the most difficult part was leaving his comfort zone.

“Being 17 and in the army and having to take orders … you’re going somewhere where no one wants to be and you pick up everyone’s feelings of not wanting to be there,” Spanos said.

Spanos is reserved about his experience in the Cypriot military, but in his second year he spent more time at the University of Nicosia, where he accrued 19 credits and finished the semester with a 3.6 GPA.

While attending school, he was able to spend less time training and more time in class and playing soccer. He played for Olympiakos Nicosia, which has a U15, U17 and U21 club along with a professional team.

Spanos spent most of his time playing for the U21 team, but played one game for the pro team. He played most of the game as a defensive midfielder. The team won 2-0 and it’s something he won’t forget.

“It’s playing with the pros,” Spanos said. “It’s a feeling I can’t really explain, to be honest. It’s unbelievable.”

Spanos’s high school trainer was the trainer for Quinnipiac assistant coach Christopher Bart-Williams when he played in Cyprus, and then head coach Eric Da Costa found out about Spanos from him.

Once the staff contacted Spanos, he was elated.

“I can’t even explain the feeling … very happy,” Spanos said. “I knew from the first email, he told me that I was on the team. That’s when I had made my decision to come here. It didn’t even take 10 seconds.”

But when Spanos had to fill out the forms for the NCAA and for Quinnipiac, he ran into some obstacles.

Because he was on the professional Olympiakos Nicosia team for one game, he was suspended for two games during the 2011 regular season. He found out about it before coming to school in an email from the NCAA.

But the suspension turned out to be the least of Spanos’s problems.

Initially, Spanos was told he only needed to submit his university transcript when he wanted to come to Quinnipiac, which he did.

“I had spoken to the NCAA and they said we only need what Quinnipiac asks for, so I came here and everything was fine,” Spanos said.

Then the athletic department told his family that it needed to submit Spanos’ SAT scores and his high school transcripts. After back-and-forth calls between Spanos’ family and the NCAA, he submitted them, but then there was a miscommunication that cost him a chance to play in college this season.

Despite his high university GPA, the NCAA instead looked at Spanos’s 2.4 GPA when he attended American International School in Cyprus. After weeks without a ruling when he was able to practice with the team, Da Costa informed him Sept. 27 that the NCAA ruled him ineligible to play this season.

“To be honest I thought it was all going to be OK this season, I thought it was going to be fine,” Spanos said. “When Coach told me I wasn’t eligible, of course it got me down. Just the fact that I could train at the beginning and then I couldn’t and now I can’t train at all or be with the team.

“I knew of (the suspension) before I came here. They had sent me an email saying I was suspended for two games to start the season. They didn’t tell me that I wasn’t eligible to play at all.”

Spanos said he is training individually right now, working out everyday like he would in Cyprus.

“I can’t really do much now,” he said. “I work out every single day, I run. I try and stay fit, I try and kick a ball around as much as I can, but my main focus right now is on my studies until I’m allowed to play again.”

Spanos said he thinks Da Costa believes he will be on the team for the spring season, and also thinks he will be cleared to play by then.

“I am confident I will be able to play in the spring,” Spanos said.