Bobcats take bite out of Bulldogs, 2-1 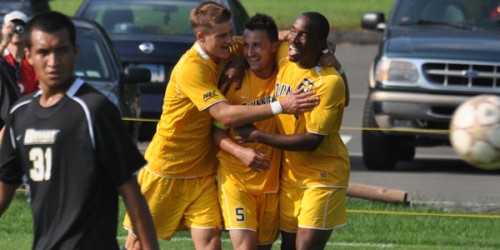 Two goals in less than three minutes was all the Bobcats needed as they notched their first Northeast Conference victory on Friday, 2-1, over Bryant at Quinnipiac Soccer Field.

Quinnipiac (3-3, 1-0 NEC) held the Bulldogs (1-5-1, 0-1) offense in check and applied consistent pressure, outshooting Bryant 22-10 for the match. A pair of timely goals from D.J. Pereira and Will Daniels towards the end of the first half gave the Bobcats a lead they wouldn’t relinquish.

Quinnipiac head coach Eric Da Costa cited the play of his defense, which allowed just four shots from the Bulldog attack in the second half, as being the difference in the game.

“That was the key that back line did really well,” Da Costa said. “We had one mistake and they made us pay. 2-1 is a dangerous score line, but let’s give the boys credit: they came out with a bit more energy in the second half and probably had an opportunity to score three or four more goals but that’s football. Sometimes they don’t go in, you just got to hope that they don’t come back and bite you on the other end. The boys did really well defensively to make sure that didn’t happen.”

Early on in the match, the Bulldogs dominated possession and generated a couple scoring opportunities. A turnover at midfield turned into an odd man rush for Bryant. The ball ended on the foot of Bunmi Familoni, who drilled a shot just over the crossbar. Moments later, Bryant turned another Quinnipiac turnover into a near goal as a Ryan Kalan shot flew just above the crossbar.

“I thought we were flat,” Da Costa said. “Our warm-up wasn’t great and we take a little bit of the blame on that as a coaching staff. Friday afternoon games are tough because the boys are coming from class and you just don’t know what you’re going to get. It took a little while to get the wheels moving but once we did I thought we looked all right.”

The Bobcats began taking control of possession and put together a few scoring chances before finally breaking through at 36:37. Freshman Machel Baker sent a pass into the box to Pereira who knocked a bending from right to left shot into the back of the net for a 1-0 Quinnipiac lead. The assist was the first of Baker’s career.

Pereira kept applying the pressure as he assisted on another goal for the Bobcats in the 40th minute. His high lob pass from midfield met the foot of Daniels outside the box, where Daniels, a junior forward, took one touch to his right and deposited his first goal on the season into the upper right corner of the net for a 2-0 lead. It was Pereira’s second assist of the season.

Bryant narrowed the deficit late in the first half on the first goal of junior Anthony Zarella’s career. The play was setup on a long lob pass from midfield. The clearing attempt was missed by a Quinnipiac defender and Zarella beat Bobcat goalie Borja Angoitia one-on-one to make is a 2-1 game.

Coming out of halftime, the Bobcats pressured the Bulldogs throughout the second half, mainly off the foot of sophomore midfielder Tim Quigley. His drives up the right sideline nearly led to two goals and the overall play from the Quinnipiac offense limited Bryant’s opportunities to even the score.

“That was the game plan we talked about it at halftime,” Da Costa said. “They wanted to launch the ball forward and they wanted to try to get it in our end as quickly as they could. We said if we could put pressure on their backs and not allow them to do that, then we will be able to have some success.”

As the horn sounded, the Bobcats celebrated their third straight victory, all of which decided by a one goal deficit. Quinnipiac will finish up nonconference play as they travel on the road to face the New Jersey Institute of Technology on Sunday.