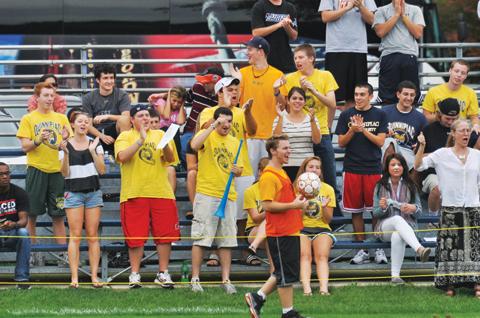 When Vincent Bond was a sophomore, he felt that something was missing from Quinnipiac’s tradition. So he took the initiative to fill the void.

And he is making school history by doing it.

Bond, a senior, wrote the school’s new prospective fight song, which will be introduced at Midnight Madness Oct. 14 at TD Bank Sports Center.

There was a contest to submit ideas for a potential fight song two years ago, and among the nine proposals, Bond’s was chosen to be the best.

“I love this university and when I heard there was an opportunity to have a fight song, I jumped on it the second it came up,” Bond said. “We’re trying to leave a legacy here, and to be able to influence years of pride and spirit is probably the most amazing thing I could have thought of.”

His father went to the University of Michigan, which has a renowned fight song, “Hail to the Victors.” Bond was inspired to create the fight song based on where his dad went.

When Bond had the idea, he ran it by his dad. “He was 100 percent behind it,” Bond said. “He saw where the roots of my idea were, so Quinnipiac and the spirit of being a Bobcat inspired me.

“Every big school that promotes itself has a great athletic program and has a great fight song, so I think it’s vital for this university to have one,” Bond added.

Bond not only has the support of his fellow peers, but also the athletics department.

Quinnipiac Director of Athletics and Recreation Jack McDonald felt that the only thing missing was a fight song.

Thanks to Bond and the QU Spirit Group, the university will.

Bond started the QU Spirit Group two years ago, but with his current role as the vice president of student concerns for SGA, he said he didn’t have enough time to control it. He put the organization in the hands of Nick Sczerbinski, who led the group to being chartered as an official organization.

While Sczerbinski is the leader, he said the creation of the fight song is more group-oriented, rather than being his idea. As the president, he said his main goal is to create more university traditions.

“I feel like coming back in, say 20 years from now and going to a hockey game and to hear the students sing the fight song that our group came up with now would be great,” Sczerbinski said. “That’s what our goal is: to create traditions for the school.”

The spirit group is searching for a professional composer to write the lyrics and the score, but in the meantime the QU pep band will provide the music for the anthem at Midnight Madness.

McDonald, who is in his 17th year at Quinnipiac, has been part of many of the university’s changes, including the switch from Division II to Division I, the name change from Braves to Bobcats, the change from becoming known as “Quinnipiac College” to “Quinnipiac University” and from playing basketball games at Burt Kahn Court to TD Bank Sports Center today.

Adding a fight song, according to McDonald, would help build on the university’s traditions.

“I was ecstatic when the kids first mentioned it to me,” he said. “To be part of the growth of Quinnipiac athletics is something special.”

Bond said he is still trying to process the idea that his idea for the fight song could be sung at the Quinnipiac-Yale men’s ice hockey game Feb. 25. Asked how he would feel if it became official for the school in the future, Bond said he would be in awe.

“I could think about it all I want and I still probably couldn’t grasp how awesome that would be to come back and see that it’s still going,” Bond said.