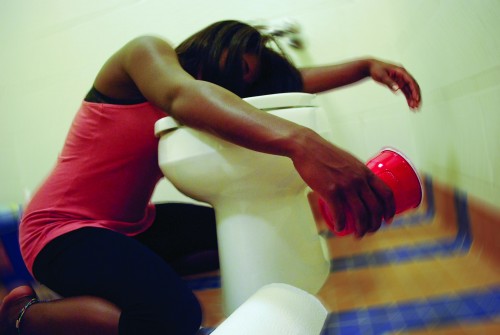 Two weeks ago, the last thing sophomore Danielle Gagliardi’s friend’s roommate remembered was taking a picture with her friends in line for Dayglow.

Then she woke up in a hospital bed, completely freaked out with a bracelet on her wrist that said “fall risk.” Apparently, she couldn’t stand, so the people at the door for Dayglow didn’t allow her to enter. Her friends tried feeding her a shish kebob so she would sober up, but people in the ambulance standing by saw and took her with them.

According to Dr. Joseph Segen’s Concise Medical Dictionary, a blackout is an episode of total amnesia lasting from hours to days after a period of intense drinking or alcohol binge.

Some college students experience them frequently as a result of binge drinking.

According to a study in the American Journal of Psychiatry, blackouts can generally be divided into two categories: en bloc blackouts and fragmentary blackouts (more commonly known as brownouts).

Someone who experiences an en bloc blackout cannot recall anything that happened during the period of time they were blacked out. However, while it is happening, they can still carry on conversations and accomplish tasks.

Brownouts are characterized by the ability to recall certain events from a period of intoxication. But a person who experienced a brownout is usually unaware that other memories are missing until reminded by someone else.

“Nobody has figured out the precise mechanism in which alcohol affects your consciousness,” said Dr. Phillip Brewer, university medical director for student health services at Quinnipiac.

However, according to Brewer, alcohol is absorbed directly by the stomach. What isn’t absorbed by the stomach then enters the small intestine. From there, it flows to the liver and is metabolized by an enzyme. The liver only metabolizes 30 percent of the alcohol. Therefore, 70 percent of pure alcohol makes it into one’s bloodstream and brain.

“The rate at which alcohol is processed depends on many factors: gender, weight, how fast you drink, how concentrated [the alcohol] is, how much food is in your stomach,” Brewer said. “But, your blood alcohol content will rise and can continue to rise for another couple of hours. An hour later you can have a higher alcohol level than you did at your last drink.”

This explains why as a night progresses, students can feel more intoxicated although they stopped drinking.

Researchers at the Duke University Medical Center suspect that consuming a lot of alcohol quickly increases the chance of having a blackout, because it leads to a rapid increase in the person’s blood-alcohol content. The brain is not prepared to deal with so much alcohol all at once.

When someone’s blood-alcohol content rises slowly over an extended period of time, people are less likely to black out, even if they eventually become intoxicated. This could be due to a small level of tolerance that develops during consumption of alcohol, and could help protect the brain from blackouts, researchers at Duke say.

While there are no clear long-term effects from blacking out, students who reach this state are more likely to involve themselves in risky behavior, as they have little or no control of their impulses.

“It was my birthday and I had a lot to drink in a short amount of time,” said Tyler Perry, a junior at the University of Vermont. “I remember my vision becoming really hazy at one point, but after that nothing. I woke up the next morning with a big cut on my head, not knowing where I was or what happened.”

Besides the obvious consequences that may result from a blackout, such as serious embarrassment and regret, Quinnipiac has its own set of consequences for students who are caught severely intoxicated.

“I went to health services after a [resident assistant] wrote me up one night for throwing up in the bathroom,” said a Quinnipiac junior. “Afterward, I received an email from the [residence hall director] about a conduct meeting. I had to attend that, take an alcohol education class and they also sent a letter home to my parents. I was on academic probation for four months, too, so if I got in trouble during that time period I think things would have gotten a lot more serious.”

According to a study done by The National Center on Addiction and Substance Abuse at Columbia University, almost half of full-time college students binge drink. However, there are no statistics regarding the number of students who blackout.

“From my experience, when people tell me their blackout stories, nothing good ever seems to come from them,” senior Jessica Prior said.