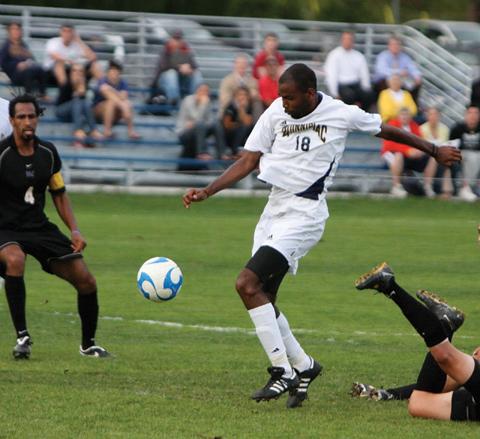 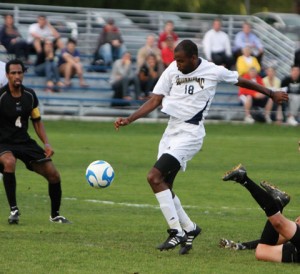 “I love it,” Brito said. “I love to be around. Sometimes it’s hard because I still want to put my cleats on. When we win it’s easy, but when we are losing I just want to grab my cleats, put them on, and get going.”

His dedication and love for the game of soccer didn’t fully blossom until Brito first came to America when he was 18 years old. Brito was born in Sao Nicolau, Cape Verde, an island chain off the West Coast of Northern Africa. The minuscule nation, discovered and colonized by Portugal, is roughly the size of Rhode Island.

“Back home everything is about soccer,” Brito said. “I didn’t play as a kid because I played basketball but every kid grew up liking it. Just once a week I would get up with my friends and play soccer and at home we followed the Portuguese league so you couldn’t go into school on Monday without knowing all the results of what happened in the Portuguese league.”

Brito immigrated to the United States in 2004 without knowing a word of English. Eventually he landed in Waterbury, Conn., and shortly thereafter, Brito was discovered playing soccer with his friends by current Quinnipiac men’s soccer head coach Eric Da Costa. The two connected right away and later that year Brito signed to play at Quinnipiac, without having played a minute of organized soccer in his life.

Success was hard to come by initially with the Bobcats but the turning point in Brito’s career was after the 2006 season, when the team finished with just one victory in 18 games.

“I came here and the main goal was to get an education and learn how to speak English,” Brito said. “Everything changed in my sophomore year. I was so frustrated with the whole situation and I promised myself I would never win one game in one season again. I started working towards that and Eric Da Costa was a great factor. Everything I know he told me, I was willing to put the extra time in and he was willing to dedicate himself to put the extra time in to help me out.”

It wasn’t until his junior season that Brito broke out with 12 goals and 27 points. He became this first Bobcat since 2001 to win the Northeast Conference Player of the Year award and followed it up with a sensational senior season where he compiled 18 goals, 39 points and was named Player of the Year in the NEC for a second consecutive time. More importantly for Brito, just two years removed from a 1-12-5 season, the Bobcats made the NEC playoffs in 2008 for the first time since 2004.

“It was one of the most satisfying experiences when the team started getting recognized and people started to talk about Quinnipiac soccer,” Brito said. “Unfortunately I didn’t get to win a championship. I would trade anything to win a title. But I feel like that team with all the players from that team, we made a good contribution for what the team is now. Now we are getting national players and the program can only get better.”

Recognizing his passion in soccer, Brito pursued a professional career. He signed and played professionally for Operario dos Acroes in the Portuguese Second Division in 2010, one of the leagues he grew up watching as a child in Cape Verde.

“That was one of the best days of my life,” Brito said. “You grow up as a kid and talk about playing in Portugal and then one day it’s actually possible. It all seemed unreal to me.”

Despite a successful first season in Portugal, Brito didn’t receive a lot of exposure and began looking for a bigger market. The standout striker soon found a spot as the first player to sign on with FC New York in the new USL Professional League.

“I was supposed to go back and they made me a good offer, but the area where I was I didn’t get much publicity,” Brito said. “I couldn’t see myself being able to expose myself to other teams and to get to a better team. In terms of football, I would rather play in Portugal. But I really wanted to continue my career and I’m a person that likes to try and push myself to achieve the best and I think New York gives me the best chance.”

His impact was immediate as he led the team in with four goals through 12 games, but had to miss the remainder of the season due to injury. Brito recently underwent surgery and should be back for the start of next season with New York.

Since his injury, Da Costa reunited with Brito, who has been working as an assistant coach on this season’s Quinnipiac men’s soccer team. The two have developed a consummate relationship that continues to develop.

“Obviously it’s great for me to work with Eric and I do learn more about the game,” Brito said. “Even though I am a coach right now, I need this experience to be a student of the game but also I have the chance to coach kids and advise them and I’m kind of the bridge between the coaches and players right now and it’s been a great experience.”

Now three years removed as a player at Quinnipiac, Brito has found his passion and hopes to continue his career in soccer wherever that may take him.