Field hockey falls to No. 14 Maine in overtime 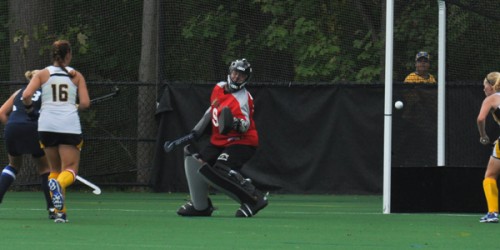 The Quinnipiac field hockey team came into Sunday’s game looking to defeat nationally ranked Maine on its home turf. After a thrilling back and forth game, in which all the goals were scored in the second half and overtime, the Bobcats were outlasted by Maine in a 3-2 overtime loss.

Black Bears forward Kelly Newton tipped in a rebound off her own shot just 46 seconds into overtime giving Maine (10-1) its 10th straight win.

The Bobcats entered the game having lost to two nationally ranked powerhouses Boston College and Penn State each ending in a 6-1 defeat.

The Black Bears outshot the Bobcats (6-3) in the first half 12-3 and held a 8-2 edge in penalty corners but could not find the back of the cage as the game would the half scoreless.

Maine’s scoring opportunities were denied by strong defense and stellar goal-tending as Bobcats’ senior goalie Nicole Lewis turned in her fourth double-digit save effort of the season and first 20-save outing of her career. The senior keeper stopped 10 shots on goal in each half, and one of the two she saw in overtime.

“It’s crazy,” Lewis said. “I have never had twenty saves in one game in my life. I feel like that’s unheard of, and to do it against a nationally ranked team and to play like that its crazy.”

The Bobcats defense can also be credited in limiting Maine’s high-powered scoring attack.

“Our defense did a lot, they did so much this game, pushing them outside, giving them off angle shots making it easy for me,” Lewis said. “They did their job the entire game.”

“Nicole has had a really stellar year for us,” Main Kohli said. “Nicole is a very intelligent person and player and she scouted the game yesterday and she knew everything she was going to see. That is why she made some amazing saves. It wasn’t luck or being in the right spot, it was that she scouted correctly and did a fantastic job bringing it to her physical presence today.”

Kaitlyn Notarianni helped the Bobcats get on the board when she picked up a loose ball near midfield, outran the Maine defense, and dribbled around Black Bears’ goalie, Alicia Frisch and blasted her fifth goal of the season into the back of the net.

Maine stormed back ten minutes later as midfielder Stefanie Gardiner tied the game at the 53:25 mark when she buried her 12th goal of the season after dribbling into the circle and sending a rocket into the back of the cage past the outstretched glove of Lewis.

Maine took a 2-1 lead just under four minutes later when Alexa Binnendijk corralled a bouncing ball in the circle and blasted her ninth goal of the season past Lewis.

The Bobcats clawed their way back and received a break when the Black Bears received a yellow card with less than 10 minutes to play. Senior defender Ashley Gradwell tallied the game-tying goal with 1:33 remaining in the second half when she controlled a rebound and poked the ball between Frisch’s legs.

The Bobcats will have a week off before traveling to Pennsylvania to take on Lafayette on Sunday, Oct. 2.