Student center to open next fall 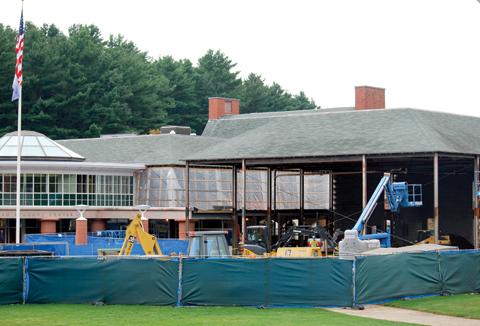 After six months of delays in the demolition and remediation phase, construction is finally beginning on the Carl Hansen Student Center and the tentative date for reopening has been set for the start of next school year.

“It will be completed in September of 2012 – and that [deadline] won’t change,” Joseph Rubertone, associate vice president for facilities administration, said. “If anything we might be better than that.”

Removal of hazardous material was the reason the project was delayed for six months, but the area is safe, Rubertone said.

“It’s always been safe,” Rubertone said. “The remediation of the material is regulation that if these materials get into the ground water it is an issue if they’re improperly disposed of.”

The remediation phase took so long because it could only be completed in small sections at a time, Rubertone said. Then, the mason had to come in and rebuild each section of the wall after remediation.

“It was that checker-boarding effect that really set us back,” Rubertone said.

“We’re very happy with [the completed offices],” Assistant Dean & Director of the Student Center Daniel Brown said. “We’re ready for the rest of be completed so that more students can benefit from it.”

This area previously housed offices for student media and student organizations. Now campus life staff, campus ministry and the office of community service are located there.

The student media offices were moved to a trailer in South Lot, and Greek life organizations do not have a home during the transition until the new student center is completed, Brown said.

“It’s a trailer – it’s not perfect. But it’s working as best as it can,” Brown said. “That is where I really applaud the students and my staff for being able to make that work knowing that it’s temporary. Even though it’s a long temporary.”

Brown said the construction has presented some challenges with planning programs for students.

“We haven’t had major programming space like we had in the past with what Alumni Hall used to be,” Brown said. “We haven’t had a lot of meeting and conference rooms so we’ve had to be creative in how we do that and how we provide programs for the students.”

When the Carl Hansen Student Center is completed there will be five or six meeting and conference rooms of different sizes, a media suite for the campus media organizations, and offices for Greek life. There is a combined meeting suite for all student organizations with storage for 60 groups. There is also an area for informal programming, Brown said. Large scale events, like lectures, will continue to be held on Burt Kahn Court.

“When this is all complete, this will be comparable to what we have at the Rocky Top Student Center,” Brown said. “Lots of open space, lots of meeting space, program space, and space for all the organizations to use.”

Other on-going or “almost completed” projects on the Mount Carmel campus include classroom renovations in Tator Hall and Buckman Center, and the history department’s move to 554 Mount Carmel Avenue. Although there has not been Quinnipiac signage on the history building, it will be installed shortly, Rubertone said

All major construction on the York Hill campus is now phasing out as the entire campus nears completion.

“York Hill, with the opening of Eastview, is complete,” Rubertone said. “All of the major construction that the university has anticipated on York Hill is completed.”

Facilities is working on some punch list items including generator and high voltage work.

There are no new buildings planned for the York Hill campus in the foreseeable future, Rubertone said.

“We still have some work to do with the wind turbines and some tweaking to do with the solar but all the real construction – cranes, backhoes, masons, electricians, plumbers – is done,” Rubertone said.

Over the summer, the facilities department renovated the fourth floor of Building 1 to accommodate the new medical school dean and faculty.

Construction has not begun on the School of Medicine, which will be in Building 2. Right now they are in the process of clearing out that building to begin renovations next year, Rubertone said.

Quinnipiac bought the North Haven campus property from Anthem Blue Cross and Blue Shield in 2007. The university then leased back parts of Building 2, 3 and 4 temporarily.

“Blue Cross is our tenant and we are the landlord,” Rubertone said.

Now that Quinnipiac is expanding, it has set a deadline for Blue Cross to move out of the Building 2 property by Sept. 30. Blue Cross will remain in Building 2 and 3 until further university expansion.

Contractors will build the medical school from April 2012 to July 2013 to be ready to take its first class of 60 students in August 2013.

Building 1 and 2 will combine into one structure, so the university will build an atrium entryway to connect the two buildings, Koeppen said.

The school of medicine will include a 330-seat auditorium which will be available to the Quinnipiac community where special events will be held. The auditorium may also be used by outside groups to hold conferences, Koeppen said.

Quinnipiac’s new Clinical Skills Assessment Center will have 16 patient exam rooms where actors will simulate different diseases and students will examine and interview them. Actors will teach students and assess them, Koeppen said. The facility will also be available to health science students.

“It’s going to be a magnificent facility and it builds upon what already exists there in the health sciences and nursing and it adds new facilities that they can use,” Koeppen said.