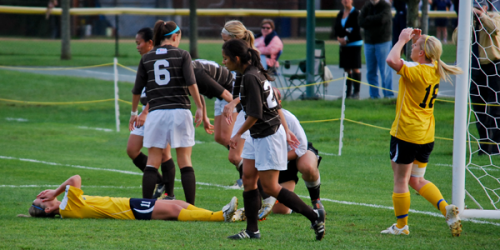 Tempers flared amid a frustrating performance against Lehigh on Friday at Quinnipiac Soccer Field, as the Quinnipiac Bobcats women’s soccer team dropped its fourth match of the season, 4-2.

For the winless Bobcats (0-4-1), the loss adds to a rough start on both figurative and literal aspects.Several small verbal and physical scuffles occurred throughout the contest, at times causing uproar among the players and fans.

The Mountain Hawks (2-2-1) committed 19 fouls, compared to the Bobcats’ seven, not including a controversial non-call that almost sent Quinnipiac’s leading scorer Furtuna Velaj to the sidelines with a leg injury.

Velaj fought persistently against several Lehigh defenders to gain control of the ball, when a Lehigh defender slide-tackled her, causing her to abruptly hit the ground. After several seconds on the ground, the star midfielder limped back into action.

Bobcat head coach Dave Clarke expressed concern over the incident, among others.

“Some of those bizarre referee decisions, they offer no protection to the players,” a visibly upset Clarke said. “You bring a talented player like [Velaj] into Quinnipiac, and you offer her no protection.”

The Mountain Hawks attacked Quinnipiac’s zone from the start, jumping off to a 2-0 lead after nearly consecutive goals from midfielder Geena Pepe in the 20th minute and forward Murphee Greeley in the 21st. Greeley later added another goal in the 51st minute as well.

“Bottom line is, you can’t blame the referees for everything,” Clarke said. “We need to improve the defensive effort, and we have to put away our shots next time.”

After being rattled by the two quick goals early on, Quinnipiac goalkeeper Jill Kelley settled down to close the half. However, Lehigh’s offense proved too powerful, as they tired down the Bobcats’ defense and forced two more past her. Kelley finished with eight saves.

“You can’t put all the blame on our goalie, as her defensive mates didn’t do the job,” Clarke said.

Despite a season-high 19 shots, the Bobcats only sent two kicks past Lehigh goalkeeper Ashley Blanks.

Quinnipiac mustered an impressive score off the foot of junior Shauna Edwards 11 seconds after Greeley scored her first goal, but couldn’t put anything in the net until the Bobcats trailed by 3. Velaj scored the team’s other goal in the 86th minute.

Quinnipiac will have to be ready to move on quickly, as it faces Holy Cross Sunday at home at 1 p.m.

Check out pictures from the game here.