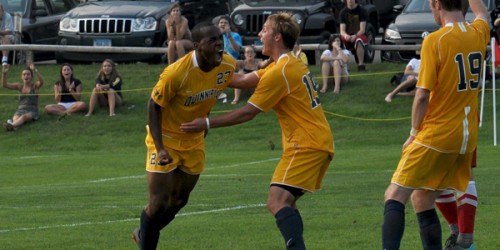 Ola Ogunjobi said he prefers to win games more than score goals. He got the best of both worlds Wednesday at Quinnipiac Soccer field.

Ogunjobi, a freshman forward from London, scored his first three goals as a Bobcat, including the game-winner in the 89th minute, to lead the Bobcats past the Hartford Hawks, 4-3, for their first win of the season.

“It feels great,” an elated Ogunjobi said. “It feels good to win.”


With the score tied at 3, Ogunjobi took a pass from William Cavallo, sped past defenders and lined the ball past Hartford goalkeeper Luke Citriniti in the right side of the net.

“It’s world class,” Quinnipiac head coach Eric Da Costa said of Ogunjobi’s performance. “Those are the goals you see on TV, you know? Late in the game, world-class players find a way to receive the ball in space, look up, know where the goalkeeper is, bend it around him and put it in a place where the goalkeeper just can’t save it.”

The Bobcats (1-3) had squandered leads in two of their first three games, including a back-and-forth game against Yale on Friday, before letting a 2-0 lead vanish in the middle of the game.

“We’ve had those situations before,” Da Costa said of his team having leads and giving them back. “We have a two-goal lead and find a way to give that away. We find a way to go behind, and find a way to tie and win the game, so definitely it’s a massive step forward for our young group to learn from the experiences that we’ve had before.”

Hartford (1-5) has played in six games decided by one goal, and has lost five of them in a row.

As Ogunjobi ran toward the goal, he knew what was at stake both for him and the team.

“I had a chance to get my hat trick and to get my name in lights,” he said with a laugh and a smile.

Quinnipiac goalkeeper Borja Angoitia made three saves, but allowed Hartford to come back from a two-goal deficit and take the lead on a disputed penalty kick and a deflection.

Rohan Roye kicked the ball that deflected off a Quinnipiac player and went into the net in the 61st minute to give the Hawks a 3-2 lead.

“I think those three goals are definitely not goalkeeper mistakes,” Da Costa said. “Deflection, there’s nothing you can do about that. Penalty kick, which probably wasn’t even there to begin with; I think it was a gift on the referee’s part. [On] the second one the player just runs past everybody and it’s nothing a goalkeeper can do. You’re kind of on an island there.”

The Bobcats didn’t trail for long – only 48 seconds – thanks to two more goals from Ogunjobi.

After Roye put the Hawks ahead, Tim Quigley sent a free kick that bounced around in the box and found its way to Ogunjobi for the equalizer.

Ogunjobi scored off a corner kick in the 49th minute, and almost went beyond the hat trick. One of Ogunjobi’s other shots deflected off the left post in the 60th minute. He was close to recording another goal in the 13th minute.

William Daniels sent a long drive across the field to Ogunjobi, who was covered by Patrick Boucher. Both jumped for the header, but the ball deflected off Boucher’s head and sailed over Citriniti’s head into the goal for a 1-0 Bobcat lead.

“I wanted to get my head on the ball, so I made the run. Someone played me the ball and I tried to get my head on it, but the defender was in front of me,” Ogunjobi said. “I think my pressure made him hit it into the goal. A goal’s a goal, and I’m happy about the win.

“Winning is more important to me than scoring, to be honest,” he added. “As long as we keep winning matches I’m happy.”

The Bobcats have a long break before taking the field again, as they face Loyola (Md.) on Sept. 24.