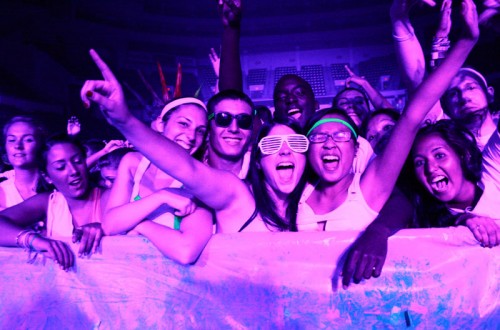 Standing in the center of Dayglow last Friday night, I saw a familiar sight. Young men and women bumping and grinding with each other as if it were any other Saturday night at Toad’s. Sadly, I was not in New Haven anymore.

Prior to the start of Dayglow, I made the trip to Hartford with a few friends. We stayed in the hotel next door to the event, along with seemingly every other college kid in the area.

The hotel room was really nice for all of 10 minutes. But before I knew it, glasses were shattered, beverages were splattered on the floor and any sense of decorum was all but lost.

Moments later, I heard a banging on the door. Uh oh. It was hotel security with one of their minions.

Apparently, they don’t like it when you imitate Mo’Nique’s character from the film “Precious.” Yeah, maybe I screamed “Precious” too loudly and danced too aggressively to “Milkshake.” What else is new?

After they gave us a stern lecture, we walked across the street to the XL Center. Upon entering the arena, we encountered thousands of others dressed in all white ready for the neon paint to drench our bodies.

The bright, flashing lights almost blinded me. The various acrobatics and giant screen behind the deejay only heightened the chaotic atmosphere.

When I was first hit with paint, it landed directly in my eye. When I finally regained my vision, I could see my once white clothes were now covered in paint.

As the house music roared through the place, I noticed everyone pair off and dance away their dignity. I kept my eyes closed periodically in order to pretend I wasn’t dancing embarrassingly, but I knew the truth.

After taking a quick break from dancing, I noticed medics taking a woman away on a stretcher. She was boldly smiling, laughing and waving goodbye to loud cheers from other concert-goers who watched her roll out. It was something you would only see on a half hour sitcom. Yet, I was witness to one of the most bizarre and hilarious sights of the evening.

The overwhelmingly pungent stench of marijuana also engulfed the arena. I didn’t sign up to dance in a crack den. As soon as random people I didn’t know started to slap my ass, I knew it was time to leave.

Back at the hotel, several of us went in the shower to wash off the paint. Any hope of regaining self-respect was in the shower.

Dayglow left much to be desired, especially after the ridiculous ticket price. If you didn’t get a chance to attend this paint party, you didn’t miss much.

After surviving Dayglow, I have a newfound appreciation for New Haven nightlife.