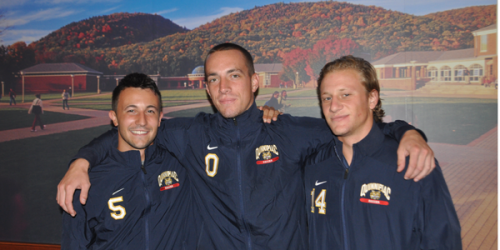 Matt Eisenberg
Matt Rothbart, Durval Pereira and Kyle Moscovics have always had a strong bond on the soccer field. Their friendship and history as teammates has existed since they were 8 years old.

This year might be the last year they all play together.

The three Cheshires natives are all in their senior year playing for Quinnipiac – likely the last year when soccer would connect them.

“It’s pretty crazy,” Pereira said. “I tell people this story every time. It’s pretty unbelievable that we’ve been together for so long and been going to the same Division I school to play soccer.”

Pereira said it all started with an 8-year-old town select team.

“And we’ve been playing together ever since then right up through high school and to college,” Pereira said.

Pereira and Moscovics went to the same elementary school, while Rothbart went to a different one. But when they played recreational soccer for the first time, there was an instant click.

“We ended up winning all our games so they never put us on the same team again,” Rothbart said with a laugh, reminiscing on the early days.

The three recall playing together on Cheshire’s town select team from ages 8 to 11, then playing Premier soccer for two years before Pereira went on to play for a different club team.

After club soccer, they played for Cheshire High School, where they were co-conference champions with Xavier High School their junior year, and returned their senior year to beat Xavier, 2-1, and win the Southern Connecticut Conference, a moment Rothbart said was probably the highlight of their high school careers.

Pereira said that it wasn’t just the three of them who helped win the conference title.

“There was a total of eight or nine of us from that select team when we were 8 who stayed together the whole way through high school,” Pereira said. “That team was like number two in the state of Connecticut and number five in New England in our junior and senior years of high school. So we were pretty, pretty dominant. We were a threat to everyone.”

Then came the seven-mile drive to Quinnipiac, where they continued to play soccer and stay best of friends. Living in the same hallway in the first floor of Commons, Moscovics said the move only made them “even better friends.”

Said Pereira: “Now that we live together pretty much and we’re around each other every day, it’s made us that much closer.”

But this year will be the first time the three of them will be together on the soccer field as Bobcats.

Moscovics didn’t play his freshman year because goalkeeper Freddy Hall was a standout, as he led the NCAA in save percentage and saves per game the year before Moscovics arrived. “It was a good learning experience,” Moscovics said, watching Hall play every minute of the 2008 season.

The next one and a half years would be the toughest for Moscovics. Because his GPA was too low, he was unable to play on the team.

Mosovics said he played for local teams, but it didn’t compare to playing at Quinnipiac. In the spring, he got back on the team.

“You don’t realize how much you miss something until you don’t have it,” Moscovics said. “So the time off really motivated me in a way to prove people wrong that I couldn’t get back on the team.”

Moscovics said it was tough to get back into his routine after taking nearly 18 months off from competitive soccer, but remembers learning from Hall.

“I think being behind Freddy my freshman year paid off in terms of learning the game,” Moscovics said.

Pereira said he was pumped to have Moscovics back on the team.

“When he came back, it was a big sigh of relief. We had a tough season last season and it was a … relief knowing he was coming back to full strength,” Pereira said. “I would choose him being behind us than a lot of other people I’ve just met, even if their caliber seems outrageously at a high standard, just because I’ve played with him for so long.”

Pereira played in 37 games his first two years, but missed almost the entire 2010 season after he went down due to injury in the team’s first game. Pereira redshirted his junior year, and is back now for his senior year.

Without Moscovics and Pereira on the field, it meant Rothbart was the only one of the core group to be on the field.

“You notice it coming in … I’m the only kid from my school playing,” Rothbart said. “It’s a little weird knowing you’re the only person from your group who’s out there.”

After the season, they will likely go their separate ways. Moscovics said he wants to coach soccer or do something with his degree in criminal justice. Pereira said he aspires to play professionally, even if it takes him overseas. Rothbart said he is still undecided, but has time to figure it out.

They all realize how their friendship on and off the field is important. They know when it started. They know how it started. Wherever they go, they will always have soccer.

“It’s so easy to play with someone for so long that you, chemistry-wise, become better as a player and as a team that I think we were able to get to where we are because we have been together for so long,” Pereira said.