This is me: Scrubs of love 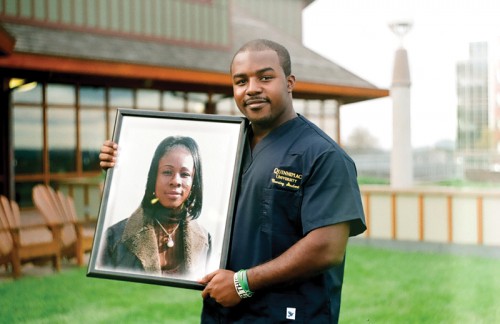 George Buahin poses in his scrubs with a photo of his late mother, Veronica. Buahin says he looks to follow in his mother’s footsteps and wants to become a nurse. (Ilya Spektor)

On a summer day in August 2009, 18-year-old George Buahin walked into a hospital room at the Coler-Goldwater Specialty Hospital and Nursing Facility in New York City. He was visiting someone special.

It was a gloomy and disheartening atmosphere in the hospital room, but something drastically changed when the licensed practical nurse walked into the room. The nurse on duty was Veronica Buahin, George’s mother, and with the quick flash of her smile, the hospital room’s atmosphere changed in an instant.

“I felt like it went from this dark setting to a bright setting, I couldn’t believe it,” George Buahin said with a nostalgic smile. “When I saw my mom, the way the patients were around her, they loved her. When I saw that I said, ‘That’s what I want to do.’”

For the past six months, Buahin has relied on loving memories such as this to help him cope with the passing of his mother. She was 46 years old.

It’s an experience he refers to as “the worst thing that has happened.”

Despite the numerous responsibilities and emotional struggles that coincide with the loss of a loved one, Buahin finished last semester with academic success. For the first time in his college career, he even earned a spot on Quinnipiac’s Dean’s List, which recognizes students with a grade point average of 3.5 or higher.

“I came in and I still took my tests, I still did my reports, I still got through my work,” Buahin said. “I bit the bullet – I separated my home life and my school life. I just did it for her.”

Measuring 5 feet 10 inches tall and weighing in at 230 pounds, Buahin doesn’t look like your stereotypical nurse, both in size and gender.

According to the United States Department of Labor, females comprised 92 percent of the registered nursing occupation in 2009.

“There are a lot of men who are very capable of being nurturing people who can take care of people,” Buahin said. “My friends at home joke, but they always respect what I’m doing.”

Kim Bolognese, a senior, has known Buahin for nearly nine years. Although a lot has changed since his middle school days, Buahin’s fun-loving demeanor has remained the same, Bolognese said.

“I can honestly say that he is as outgoing today as he was the day I met him,” Bolognese said. “Take a walk with him across campus and I can guarantee he will stop at least 10 times to say hello to everyone.”

Buahin actively participates on campus as a member of the Delta Tau Delta fraternity, working at the Fitness Center and serving as one of Crescent Hall’s residential assistants on the York Hill campus.

After he receives his bachelor’s of science degree from Quinnipiac, Buahin aspires to earn his nurse practitioner license with a specialty in either neonatal or surgery. While Buahin planned for the future, he had to make adjustments. Buahin said that 10 years from now, he had hoped to work alongside his mother in a hospital.

“When my mom passed away, life was different,” Buahin said.

In addition to caring for his mother while she was sick, Buahin also remained emotionally strong for his younger sister Darlene, a Quinnipiac sophomore.

“George and I have a very close sibling relationship,” Darlene Buahin said in an email. “I feel like we share the same heart and soul. Throughout every one of our conversations I feel like my brother gives me a piece of himself.”

George Buahin recently began his mandatory clinical program at the Brittany Farms Health Center in New Britain. He cites his relationships with other nursing majors as one of his favorite aspects of the program.

Although he remains passionate about nursing, Buahin’s career choice frequently jogs memories of his mother. Just last week, Buahin was reminded of his mother during a clinical exercise with a simulation mannequin.

“The dummy wasn’t my mom, but I guess I psychologically just imprinted my mom’s image on it,” Buahin said. “I think I took extra care of it thinking that was how I would take care of my mother.

“It motivated me, even when she did die, because I feel like she’s always watching me. I feel like she wouldn’t want me to stop. Not once did it stop me, and it’s not going to stop me.”