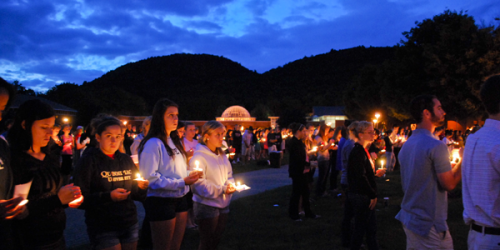 Sept. 11 has been deemed the World Day of Prayer for Peace, which is exactly what the Quinnipiac community united to commemorate this evening under candlelight with the flag waving at half-mast.

As the evening hit dusk, the Knights of Columbus chapter at Quinnipiac walked to each of the hundreds of attendees scattered across the Quad lawn, lit each of the candles, and gave each person a prayer card.

David Ives, executive director of the Albert Schweitzer Institute, reiterated the same message he had for the community this morning, to stand together. He read a letter alumna Jessica Warring wrote to her late father on the 10-year anniversary of his death.

“Hold your candles high as we stand with those we know and those we don’t and realize we are all one,” Ives said.

Across the Quad, multiple different campus organizations including: Tau Kappa Epsilon, Alpha Delta Pi, and the Knights of Columbus stood together in prayer. In addition, hundreds of members of the faculty and student body joined together to remember those lives lost.

“This ceremony means so much to our organization because we lost more than 50 members that day,” said Zach Daly, the Grand Knight of the Knights of Columbus chapter at Quinnipiac. “We want them to see that our prayers and support are still with them 10 years later.”

As poems and speeches were read by members of the campus ministry, College Republicans, College Democrats, and a performance from Greg Garvey of the song “Remembrance 9/11,” the crowd grew emotional and were brought back to that Tuesday 10 years ago.

“On that day there were no distinctions between races and ethnicities — we were all Americans,” said Chris Mansfield, President of Quinnipiac College Democrats. “It speaks a lot of us as people and I only wish for that to carry us all forward.”

The community left the ceremony with a great sense of pride to be part of such a community that remembers the importance of this tragic anniversary.

“It made me not only proud to be an American, but also a member of the Quinnipiac community,” said Danielle Cascerceri, a senior Public Relations major. “We take for granted what our school does for us to help us realize that we are part of a bigger community.”

The memorial ceremonies will continue on Tuesday with a screening of “Out of the Ashes: 9/11” in the Grand Court Room and a lecture presentation by The New York Times foreign affairs columnist in the Recreation Center on Wednesday.