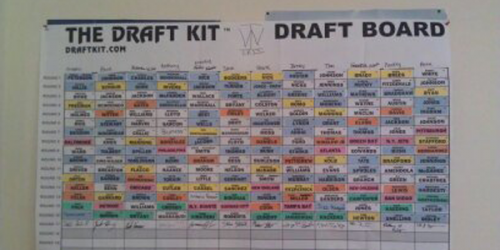 I got Arian Foster at number eight. Four tight ends were gone by the end of round five. Somebody took the Steelers’ defense in the sixth round!

This is wonderful conversation fodder for many males age 16 and up (and the occasional awesome female). Fantasy football is a way of life. For me, it makes watching otherwise unimportant games on a Sunday afternoon that much more exciting. Football purists may not like it, saying it takes away from the heart of the game. I do not care. It is still better for the sport than the dumb new kickoff rule. Although, these 108-yard returns are fun to watch in the rare instances that they happen.

Fantasy sports are here to stay.

Fantasy football is about much more than creating a team of your favorite or the best players. Let me lay it out for you.

There is a draft before the NFL season starts. In the case of the Irma West League, now in its fourth year, we all gather together to do it live. Twelve guys and the draft moderator cram into one living room, doing nothing but studying charts and giving each other attitude. There is also a monetary component, greasy food, and varying qualities of beer. This is collegiate male bonding at its finest.

Each week offers a chance to talk trash to one of your buddies without actually having to exert any physical effort on the weekends to back it up. Instead, you can make fun of them for starting Lance Moore instead of Devery Henderson or dropping Cam Newton before the season even started.

You can get together with some people from your league on Sundays, and watch a game in which the Colts (without Peyton Manning) play the Texans (without Arian Foster) and have it still be attention grabbing. Only because of the fantasy world would I ever care that Ben Tate scored instead of Derrick Ward. It also makes the Andy Dalton injury a conversation piece for people outside of Ohio.

I still find it comical that fans of the NFC East can high-five or commiserate together over the performance of the 49ers’ defense, who won games for more than a few fantasy owners this week.

At the end of the day it offers a chance at camaraderie over nothing more than a shared love of sport and competition (I say competition as well, because the back-and-forth is not for the faint of heart). It is something to yell across the Quad about. It is a club of sorts, but without the responsibility to do anything for anybody other than yourself. It is most definitely the most wonderful time of the year. The guy I was playing against this week called me while he was working (as an EMT no less) to check on our matchup (just another argument why everybody should have a smart phone).

I said this once in a semi-flippant manner, but it really is a chance at bonding for all those involved. I may be loquacious at times, but I am still a dude and unable to adequately express my feelings of friendship, or any other feeling for that matter, in a socially normative or timely manner. Maybe I am giving fantasy football too much credit, but I really love it.

Oh, and it is obsessive. I checked injury reports, the waiver wire and my upcoming lineup at least twice while writing this.