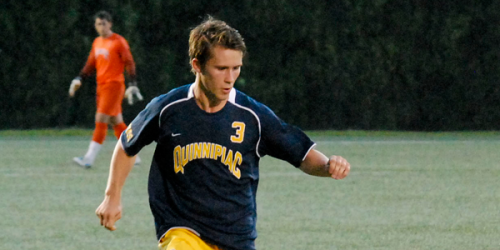 Friday’s men’s soccer matchup between Quinnipiac and Yale at Reese Stadium featured an emotional roller coaster between the two teams in a back-and-forth affair.

After Philip Suprise hit a game-tying, momentum-lifting goal in the 84th minute, Yale responded minutes later, deflating the Quinnipiac energy and securing the Bulldog’s second win of the season.

Just 2:59 after Suprise’s goal, Charlie Neil shot a slow dribbler into the bottom right corner of the net to give the Bulldogs (2-1) a 3-2 lead, and eventually the victory.

“Yale’s a good team; they’ve always given us trouble,” Quinnipiac head coach Eric Da Costa said. “They always play tight games and today was no different. We deserved more but you got to tip your hat to Yale for coming back and getting the victory.”

The Bobcats (0-3) saw a 1-0 halftime lead vanish early in the second half when Jenner Fox and Peter Jacobson scored two goals in the 55th and 59th minute to give the Bulldogs a 2-1 lead.

But Suprise wasn’t letting the Bobcats go down without a fight, hitting the equalizer from 25 yards out with 5:31 left in the game.

Freshman goalie Borja Angoitta, who made several key plays to keep the Bobcats in the game, allowed a soft goal from Neil go right by him and into the bottom right corner of the net.

“[Angoitta] was stellar the whole game, he made saves that kept us in the game so I wouldn’t put anything that happened on him,” Da Costa said. “It’s a team game and the team dropped the ball on the last play. Three minutes to go they just have to kick the ball out to one of those windows there and it puts out the fire. We made a bad choice, we’re a young team, we’re going to make immature mistakes and that was one of them.”

Senior captain Durval Pereira scored his first goal of the season in the 32nd minute of the first half to put the Bobcats on board first for a 1-0 lead.

But for the second time this season, the Bobcats couldn’t hold onto a 1-0 lead. Going back to last season the Bobcats have lost 10 games by a margin of one goal.

However, Da Costa doesn’t see any correlation between last season and the start of this one.

“Last season we played the entire season with 13-14 players, we were decimated with injuries, and I’m very proud of my team for hanging in there all those games,” Da Costa said. “This year is completely different. We have 14 new players come into our program and trying to learn who each other are and the fact that two of the three were as close as they were, that makes us feel like we’re making progress and starting to believe in each other.”

The loss also marked the ninth consecutive season in which the Bobcats (0-3) did not beat Yale, and are 0-7-2 all-time against them.

“I don’t consider it a rivalry,” Da Costa said. “I consider it a good, competitive game that both teams could get some value out of it and prepare them for Ivy League play, and prepare us for Northeast Conference play.”

The Bobcats will continue its non-conference schedule when they open a three-game homestand against the University of Hartford on Wednesday at 4 p.m.