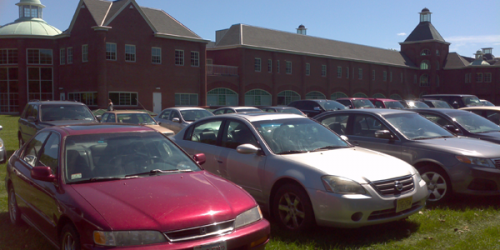 Students parked on the lawn near the Law School Aug. 30 after both North Lot and Hogan Lot filled up. Now, security will divert students to Westwoods Lot instead of the lawn. Photo by Marcus Harun/Chronicle

With the first weeks of classes coming to a close, the initial perks of living off-campus came to a screeching halt for Quinnipiac’s upperclassmen.

When half of the 5,900 undergraduates at Quinnipiac made their way up to York Hill, Whitney Village, or to off-campus housing, the problem of overcrowded dormitories at Mount Carmel seemed solved. But the move to York Hill created more frustrations for first-time commuters: a crammed parking lot.

In the past, undergraduate students simply rolled out of bed 15 minutes before class and still managed to be on time, but commuters now see how difficult it is to find a spot in North Lot. If there are no remaining spaces, commuters are displaced to the dreaded Hogan Road Lot, a 10-minute walk from campus.

“This afternoon, I got the last parking spot in Hogan which made me question where the next commuter looking for a spot would go,” said Ali Mandile, a junior English major.

According to a Wednesday announcement by Harry Needham, assistant chief of security, because of the overflow of traffic, commuters will now be diverted to the Westwoods Lot when North Lot and Hogan Road Lot reach their capacities.

David Barger, chief of security and safety, said there is no option to create additional parking at the Mount Carmel Campus due to the zoning restrictions of Hamden.

“Our problem is with traffic flow at certain times during the day,” Barger said. “Once one of the lots fills up we try to put a sign out to encourage people to go to Hogan Road Lot to save them time. The congestion is like the mall at Christmas time … it will subside after the first weeks of school are over.”

Parking has been an issue in the eyes of commuters for years, but with the influx of students moving up to York Hill after the completion of the final dormitory, Eastview, students living in off-campus housing question whether there could be a solution to keep students from having to use the Westwoods Lot.

“I think that York Hill students should not be allowed to drive to school because people who live off campus don’t have another option but to drive,” said Alex Russo, a senior advertising major. “Off-campus students try to make the effort to carpool, but even that doesn’t help the over crowding.”

Students residing at York Hill have the option of taking the shuttle to the Mount Carmel campus, or driving down and parking in the commuter lots. Currently, the shuttle system does not have a specific schedule, which makes it an unreliable option for York Hill residents.

“The shuttle system is far from perfect,” said Brad Groarke, a senior finance major and York Hill resident. “If all the students from York Hill took the shuttle down to campus, then there would never be enough shuttles to go between the campuses. I don’t know what the solution could be, but Quinnipiac better think of something because the community keeps growing.”