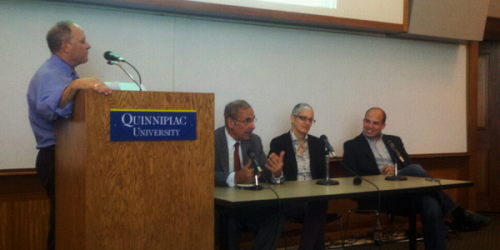 A panel of former and current journalists spoke Thursday in Mancheski Executive Seminar Room on the news media’s coverage of 9/11, as part of Quinnipiac University’s series of commemorative events for the 10th anniversary of the terrorist attacks.With close to 80,000 followers on Twitter, Brian Stelter, a media reporter for The New York Times, had a lot to say on how coverage would have been different if the terrorist attacks had occurred in the age of Twitter.

“One tweet from one guy can ricochet across the Web in a matter of seconds,” Stelter said.

The panel discussed how Twitter can serve as a medium for misinformation to spread, and how it would have affected the chaotic environment in newsrooms that day. Stelter said he had an optimistic view.

“The Web has shown it is self-healing. That is the key,” Stelter said. “I’d like there to be a more positive attitude toward corrections among journalists. Corrections are often viewed as a negative, they’re viewed as a punishment, an admission of fault or guilt. The reality is people make mistakes, and the more friendlier you are about that, the more you embrace it, the less embarrassing  less humiliating the less punishing it is for journalists. Corrections are a part of the normal course of life.”

Alongside Stelter was Margarita Diaz, an associate professor of journalism and chairperson for journalism at Quinnipiac, and Paul Friedman, former executive vice president of CBS News and ABC News, who offered their journalistic perspectives of the attacks from then and now.

“It’s hard to imagine it being more chaotic than it was,” said Friedman, who was with ABC News at the time. “I think we would have had to deal with a lot more stuff; we would have had to spend time on stuff that we really didn’t need to. But we also might have found information that was useful — so it’s a mixed bag.

“It is what it is, [Twitter] is there. We’re going to have to learn how to cope with it.”

Friedman discussed how he treated video coverage differently than photography.

“The harder call was the planes. I just felt that certainly after the first bit of coverage that using it just because you had nothing else to put on the screen was not the right thing to do. It’s just a gut feeling. And in cases like that, when you need to show some visual, sometimes stills are less offensive and have less emotional impact.”

Stelter’s overall take on Twitter’s use as a journalism tool was clear.

“To me it’s so much more beneficial than it is harmful,” he said.